Olbermann Reveals Countdown Killed Bush ‘Plagiarism’ Segment, But Who Ran With it?
video

Olbermann Reveals Countdown Killed Bush ‘Plagiarism’ Segment, But Who Ran With it? 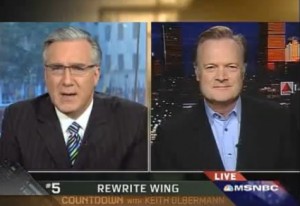 Embedded in Keith Olbermann‘s Special Comment from last night‘s Countdown was the fact that the show had recently killed a segment in which President George W. Bush was alleged to have plagiarized portions of his new book, Decision Points. Citing weak evidence in the Huffington Post’s source piece, Olbermann asked “Would Fox have (killed the segment)? Would CNN have?” Excellent question! So, who exactly ran with what plagiarism story? And which similar story that was too good even for Olbermann to resist?

Friday night I found, as we rehearsed its presentation, that a segment implying former President Bush had lifted parts of his autobiography from other works of recent history, was largely based on excerpts that mostly required heavy editing and still produced only weak evidence. We killed the segment. Would Fox have? Would CNN have?

While it’s tempting to criticize Olbermann’s onanisitic back-patting, his point was actually not self-congratulation, but rather, the contrast between his own editorial judgment and those of his “neutral” or “Fair and Balanced®” counterparts at Fox and CNN. As it turns out, he hit the nail right on the head. While most of cable news ignored the blog-fueled Bush “plagiarism” story, CNN’s Parker/Spitzer dove right in:

Spitzer actually says “News just broke today that several sections of George Bush’s memoir are apparently plagiarized,” and aside from the use of the qualifier “apparently,” neither he nor Parker evinces the slightest bit of skepticism.

While Olbermann wondered if Fox News would’ve killed the segment, he surely meant if the shoe was on the other foot, and the accused plagiarist was a Democrat. On that count, there are numerous examples, but in this clip, current MSNBC pinch-hitter Cenk Uygur plays along with Fox & Friends, MST3000-style, as they go over a particularly flimsy allegation involving former NY Governor Mario Cuomo.

Cable news networks aren’t the only entities to hear the irresistible siren call of a plagiarism story. During a 2008 presidential debate on CNN, then-Senator Hillary Clinton took aim at “Change you can Xerox,” with an immediate back-and-forth between accuser and accused.

There is another plagiarism story that closely mirrors the current Bush kerfuffle. Like the Bush story, it, too, originated at The Huffington Post. The subject was an even brighter star in the Republican universe, former Alaska Governor Sarah Palin. The “case” against Palin was even weaker than the one against Bush:

…an accusation of plagiarism arose (since denied).  Geoffrey Dunne laid out the case that Palin had lifted portions of the speech from a 2005 article by Newt Gingrich and Craig Shirley (BTW, it must really suck to have a girl’s first name as your last name).  You can plainly see that Palin does, indeed, crib from the article.  So, what’s the problem?  Here’s the problem:

After (an excerpt that appears to echo the Gingrich/Shirley article but doesn’t lift from it directly), Palin acknowledged that, “Recently, Newt Gingrich, he had written a good article about Reagan….” (Recently? It was four years ago.) Without mentioning Shirley, she quotes and paraphrases from the article at length…

Cue needle scratching off of record album sound effect.  She announces that her speech is drawn from the article from which she supposedly plagiarized…While Palin doesn’t mention co-author Shirley, or even allude to Laverne, she clearly credits Gingrich.

So, anyone whose editorial judgement failed them sufficiently to cover that weak sauce is probably in for a good talking-to by Keith Olbermann. From the June 8, 2009 edition of…Countdown?:

There is a small, but key, difference in the editorial judgements exercised here. The Bush segment that Olbermann killed was based purely on that thin HuffPo story. The decision to cover the Palin story was based on the fact that Palin issued a denial, a solid reason to cover it, and part of a pattern by Palin’s people of punching down at poorly-sourced stories.

As to the way it was covered, while guest Lawrence O’Donnell (wrongly, in my view) convicted Palin’s speechwriters of plagiarism, there was at least a modicum of skepticism shown, and the overall effect was to downplay the charge. The plagiarism angle wasn’t even the central point of the segment, but rather, the relationship between Palin, Newt Gingrich, and the direction of the Republican Party.

Still, the newly-reflective, post-suspension Keith Olbermann of 2010 might have covered it differently, or not at all. Only he knows for sure.