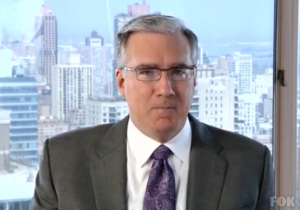 “We considered a lot of names,” he said, but only one name was the right fit. In a statement, Current TV said the show “marks the return to the airwaves for Olbermann, one of journalism’s most provocative and outspoken voices, on independently-owned Current, which was founded in 2005 by Al Gore and Joel Hyatt and is now distributed in more than 75 million households around the world.”

Here’s the release from Current TV:

The show, to be called “Countdown with Keith Olbermann,” marks the return to the airwaves for Olbermann, one of journalism’s most provocative and outspoken voices, on independently-owned Current, which was founded in 2005 by Al Gore and Joel Hyatt and is now distributed in more than 75 million households around the world.

Olbermann’s decision to join Current was announced in February. In addition to executive producing and hosting his show, Olbermann was appointed as Current’s Chief News Officer.

At the time of the announcement, Olbermann said, “Nothing is more vital to a free America than a free media, and nothing is more vital to my concept of a free media than news produced independently of corporate interference. In Current Media, Al Gore and Joel Hyatt have created the model truth-seeking entity. The opportunity to partner with Al, Joel and Mark Rosenthal makes this the most exciting venture in my career.”

“’Countdown to Keith Olbermann’ will showcase the return to television of one of America’s most gifted thinkers and communicators,” said Joel Hyatt, co-founder and Executive Vice Chairman of Current. “Keith will be back, speaking truth to power and calling them as he sees them– but this time, on America’s only independent news and information TV network.”

“The show will combine familiar and popular features with some new elements that we can’t wait to unveil,” said Mark Rosenthal, CEO of Current. “We’re creating a great platform for Keith’s style, which includes a very sophisticated digital presence for him — that we think will appeal to his very enthusiastic and active following. The show will also appeal to new viewers tuning into Keith for the first time.“

“Countdown with Keith Olbermann” leads a programming slate on Current that includes original and acquired TV series aimed at an influential adult audience. The network’s original, long-form programming includes “4th and Forever,” the documentary series premiering May 26th at 9 p.m. ET, about the extraordinary players, coaches and families behind the Long Beach Poly football program (which has sent more players to the NFL than any high school in the country).

Current features compelling stories about everyday heroes and ordinary people in extraordinary situations, and takes you to sometimes dangerous and always intriguing places. Current shines a light on controversial subjects, tackling hot issues of the day in a thoughtful and sometimes humorous way. Current engages its viewers by sparking debate and discussion, and via interactive formats that allow viewers to inform its stories.