Olbermann: MSNBC Suspended “Without A Hearing” For “Inconsistently Applied Rule” 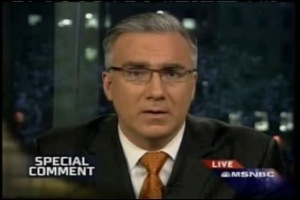 On the eve of his return from suspension for contributing to political campaigns against company policy, Keith Olbermann has released an open letter thanking his supporters for the support, apologizing for the “unnecessary drama,” and telling his side of the story: how an “inconsistently applied rule” landed him a suspension after “my representative was assured no suspension was contemplated.”

The NYT Media Decoder blog first posted his thank you/apology/condemnation letter, in which he warmly thanks supporters– including “those with whom my politics do not overlap”– and cites his return to the airwaves as an example of “the power of individuals spontaneously acting together to correct injustices great or small.” While he does not explicitly condemn his suspension, his version of the past few days is not exactly a glowing review of MSNBC company policy:

“You should know that I mistakenly violated an inconsistently applied rule – which I previously knew nothing about – that pertains to the process by which such political contributions are approved by NBC. Certainly this mistake merited a form of public acknowledgment and/or internal warning, and an on-air discussion about the merits of limitations on such campaign contributions by all employees of news organizations. Instead, after my representative was assured that no suspension was contemplated, I was suspended without a hearing, and learned of that suspension through the media.”

Can we expect this to function as a working draft of a Special Comment set for tomorrow? We’re still another 24 hours away from finding out. In the meantime, here is the full letter (again via NYT):

“A Statement to the Viewers of Countdown”