Countdown With Keith Olbermann | Three-Fifths Of A Person | Corporate Spending

Keith Olbermann Says That In The Midterms, Voters Are Being Treated Like “Three-Fifths Of A Person” 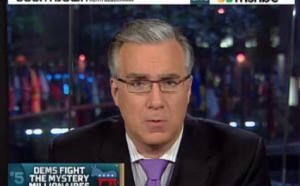 “What exactly do the secret big-money moneybags behind hundreds of millions of dollars of attack ads against Democrats want from the Republicans they’re trying to help?” asked Keith Olbermann—a little inarticulately—at the top of his show last night.

The answer? As a DNC ad Olbermann played shortly afterwords puts it, “The Republicans and their corporate buddies want to be back in charge: Wall Street writing its own rules again. Big Oil and insurance companies calling the shots. More jobs shipped overseas.” And so on. The ad does a good job of fear-mongering, which means it fits right in with our current political climate.

A few minutes later, Olbermann and Rep. Barney Frank discussed the “secret millionaire money,” as well as recent polls that show certain Democrats may perform better than expected in the midterms. Near the end of their discussion, Frank begins to talk about how vast amounts of GOP money will effect the elections. That led to the following exchange:

Frank: “What this Supreme Court has done, what Karl Rove and the Chamber [of Commerce] are trying to take advantage of, is the system whereby the money counts system of the capital system will overwhelm the democratic equality. And I really believe that in this off-year election, our democracy is very much at stake—in the sense that the principle of ‘one person, one vote’ is going to be submerged by a flood of right wing, anonymous, extremist money.”

Olbermann: “Yup. It’s like we’re back with three-fifths of a person. Only we’re all the three-fifths, and the corporations are 100 each.

Eesh. Olbermann, of course, is referring to the Constitution’s notorious Three-Fifths Compromise, which stated that only three-fifths of any state’s slave population would be counted when calculating that state’s total population.

Like most people, Olbermann misunderstands the clause; contrary to popular belief, it doesn’t actually state that each slave was considered to be three-fifths of a person. But either way, his analogy doesn’t make a ton of sense.

Video of the entire segment from Countdown is below. Olbermann mentions the three-fifths thing near the end of the clip.