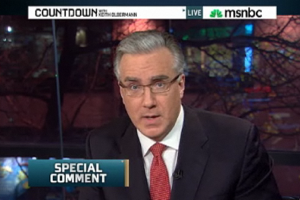 Keith Olbermann may have just inadvertently won himself the praise of the American right. In a twelve-minute Special Comment refuting Ted Koppel‘s obituary to “real news” this week, Olbermann attempted to unmask the true nature of so-called objective journalism legends like Walter Cronkite and Edward R. Murrow. They weren’t objective, he argues– they were liberals, just like him.

For the benefit of many of his younger viewers, Olbermann began his special comment with a brief history lesson about why exactly it is people like him revere Cronkite and Murrow so much– their “searing explosions of truth,” Olbermann argued, “saved this country.” He especially praised the work of the Watergate years, work that Olbermann views as impossible without the journalist having a moral and ideological compass with which to find direction. As high as his praise was for these men (Koppel included), Olbermann lamented the distortion of their work into a notion of “the good old days” when newsmen had no say in judging the behavior of those they covered, as if no great journalist were allowed to think:

“The great change about which Mr. Koppel wrings his hands is not partisanship nor tone nor analysis. The great change was the creation of the sanitized image of what men like Cronkite and Murrow… and Koppel did. These were not glorified stenographers. These were not neutral men. These were men who did in their day what the best journalists still try to do in this one: Evaluate, analyze, unscramble, assess. Put together a coherent picture or a challenging question using only the facts as they can be best discerned, plus their own honesty and conscience.”

He went on to describe the virtue of objectivity as a “false god,” blaming Fox News for popularizing the idea of nonpartisanship: “when you have a false god, you’re going to get false priests.” Over a montage of Fox News clips, he decried the use of words like “objective, neutral, two-sided, fair, balanced,” and a defense of MSNBC. “I’ve criticized President Obama this week more than Fox News criticized President Bush in eight years,” he charged. There were also vestiges of bitterness in his defense of MSNBC that could be traced back to his recent suspension– he noted that, yes, many of MSNBC’s anchors subscribe to the “small-l liberal* point of view,” but that the network only began to prosper when people with his idea of what journalism was were elevated to anchor status.

He concludes with a complete condemnation of Koppel, saying that he and those who followed his model of journalism during the Bush era “failed” as they allowed “decreasingly coherent excuses” for the Iraq War to pass under their radar. “When truth was needed all we got was facts– mostly lies, anyway,” Olbermann snapped, claiming Koppel and “objective” journalists were “praying at the altar of the false god of objectivity” when they should have been investigating.

In his closing, Olbermann makes a new and completely innovative argument that will endear him with the right as much– maybe even more than– the left, an argument that, now that he mentions it, seems a long time coming: it was the “objective” journalists who made a mess of the news world, and now partisans like Olbermann have to come and clean it up. Sure, he makes this point at the expense of Fox News’ reputation, and many will laugh at the idea that Fox News is to blame for introducing objectivity to the world of journalism (and those who wouldn’t laugh at the idea only serve to prove Olbermann right about Cronkite and company). But putting parentheses around that part of his comment, his case flips what people like Jon Stewart consider common knowledge on its head. Suddenly, it’s not the “24-hour politico-pundit-perpetual-panic-conflictinator” that is to blame for the death of journalism– it’s the only thing even remotely resembling journalism remaining.

To Olbermann, partisan reporting of the type he practices is journalism, the only surviving embers of a fire quashed by fraudulent claims for balance that killed off the voices of truth that didn’t fit its narrative.

The full Special Comment via MSNBC is below. As the dust settles, it will be fascinating to follow the responses to his attack from both the left and the right, and keep track of where his support will be loudest.


*Olbermann was probably trying to separate the views of people like him and Rachel Maddow from those of the mainstream Democratic Party, but the term “small-l liberal” often refers to the ideas of classical liberalism (John Stuart Mill, et al) that more accurately align with what is known as “libertarianism” in America.