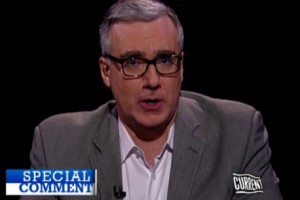 On Tuesday night’s Countdown, fiery host Keith Olbermann delivered one of his trademark Special Comment™ segments on the roiling controversy surrounding the Susan G. Komen breast cancer charity’s decision to de-fund, then maybe re-fund, Planned Parenthood‘s screening services. He compared the incident to McCarthy-era “witch hunts,” and said that Komen founder and CEO Nancy Brinker had “dishonored both her sister’s memory, and this essential cause.”

The main thrust of Olbermann’s commentary is that the resignation of Komen senior VP Karen Handel is not enough to restore the broken trust of women who support, and rely on, the charity to keep politics out of the fight against breast cancer. It’s a sentiment that has been echoed far and wide in the media. Handel and Co. have tried to portray the stunning backlash against the decision as bullying, but that’s a bit like Nelson Muntz crying when someone punches him back. Against the wishes of its supporters, the Komen board wielded their fundraising muscle to made a political statement. The impulse to protect Komen, because it has become so ubiquitous, so identified with its cause, too pink to fail, underscores the importance of restoring that trust.

Olbermann’s comparison of the right’s coordinated attacks on Planned Parenthood to McCarthy-style witch hunts is based on Komen’s original rationale (or pretext) for the defunding, the partisan congressional investigation launched by Rep. Cliff Stearns (R-FL). More broadly, though, the right’s campaign against women’s health care probably has a better historical analog in the religious Inquisitions of the Middle Ages. Not content to target abortion rights, Republicans have widened their attack to include contraception, the vaccine for cervical cancer, and in this instance, breast cancer screening and prevention, all in service of imposing their own morality on women’s health care.

Where Olbermann crosses the line is in his presumptuous stewardship of Susan Komen’s memory, an inappropriate intrusion into another’s personal grief. “Mrs. Brinker has dishonored both her sister’s memory, and this essential cause,” he said, in an obvious and manipulative attempt to shame Ms. Brinker. Keith Olbermann, as far as I know, never met Susan Komen, and really has no claim to her memory.

This misstep does illustrate an important facet of this controversy, though. I never met Susan Komen, either, but as someone who cares deeply for a great number of people with breasts, that name does mean something to me. Until now, it has meant thousands of little pink yogurt tops, and pink towels at NFL games, and ribbons, and all things breast cancer awareness. As this controversy played out this week, though, it made me wonder, if that all goes away, what’s there to replace it? Some will find Keith Olbermann’s declaration that this “witch hunt” will “kill some women” overwrought, but for those whose only access to health care is often from Planned Parenthood, that’s a very real possibility.

A great arachno-American once said “With great power comes great responsibility,” and it is the stewardship of that responsibility, in her late sister’s name, that Nancy Brinker ought to think about before she decides to make it into a big, pink political football.