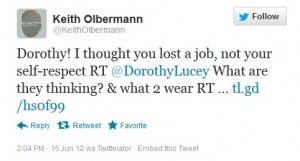 It’s been awhile since anyone has seen or heard from former Current TV host (and current former TV host) Keith Olbermann, but it turns out he has plenty to occupy his time. Since an April appearance as a This Week panelist, the former Countdown host has been spending his time taking shots at Cenk Uygur‘s The Young Turks and, according to his Twitter feed, counting his money.

Dorothy Lucey, who was recently let go as co-host of KTTV’s Good Day L.A., was slated to appear as guest co-host of Current TV’s The Young Turks on Friday. She tweeted about the gig, and Olbermann responded by tweeting “Dorothy! I thought you lost a job, not your self-respect.”

The jab is yet another example of the character trait that led to his exodus from television. While he was host of MSNBC’s Countdown, Olbermann tapped Cenk Uygur to guest-host for him, and when Cenk had his own falling-out with that network, eagerly swooped in to scoop him up for Current TV.

However, his tune changed when The Young Turks‘ ratings performance began to overshadow his, and in court papers surrounding his tumultuous exit from Current, Olbermann attacked Cenk, and claimed he opposed his hiring.

In fact, a quick perusal of Keith Olbermann’s Twitter feed perfectly illustrates the imbalance that has led to his downfall. He’s famous for punching down at anonymous critics on Twitter, and has lately taken to responding to insults with the boast that he’s busy “counting his money.”

Such responses promote the idea that financial might makes right (based on that system of values, we should all vote for Mitt Romney), but more than that, they’re just petty. Mixed in with the shots at former colleagues and anonymous trolls, though, are retweets of fans reliving Olbermann’s glory days, like his moving Special Comment on gay marriage, or the full hour he devoted to health care reform. It is between these poles that Olbermann’s decline rests.

At his best (or worst, depending on your political point of view), Keith Olbermann was still a raging egomaniac, but he was able to channel that self-perceived grandeur into commentary that packed a real punch, on issues that really mattered. Even to his critics, that Keith Olbermann was many things, but he was never boring, and he was never small.

Update: Apparently, in addition to counting his money and trash-talking former colleagues, Olbermann is also spending some time reading Mediaite, as this exchange demonstrates:

Keith Olbermann ‏@KeithOlbermann :@PlSTOLPete And riddled with factual errors or outright lies written by a profoundly disturbed individual. I was ripping Current.

Anyone who can read Olbermann’s own court documents can see through this attempt to distance himself from his lies and insults against Cenk Uygur, but this tweet is at least an indication that he feels bad about it, if only because he might one day need Cenk’s help, or some of his fans, to get back into the business.