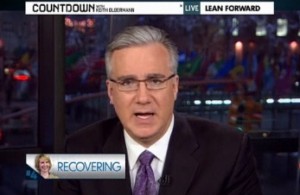 On Monday night’s Countdown, host Keith Olbermann cited a new Daily Kos/Public Policy Polling survey that showed that 13% of Tea Party voters think that violence against the current American government is justified, versus 6% of Republicans, and 5% of Democrats. He discussed the results with Mother Jones’ David Corn, and how they relate to the discussion on violent rhetoric in the wake of the mass shooting in Tucson.

Buried in the report, though, is the fact that another group polled at 17% on the very same question, a group in which alleged Tucson shooter Jared Lee Loughner is firmly ensconced.

The Tea Party result is definitely worth noting. Tea Party Americans, as Sarah Palin calls them, are more than twice as likely to feel that violence against our government is justified, which is a persuasive indictment of the rhetoric of armed revolution that is the movement’s hallmark, and to which some Republicans play.

That is not to say that the shooting in Tucson was, directly or indirectly, caused by this. As I’ve said before, though, just because something you said didn’t cause a mass murder doesn’t mean it was a responsible thing to say.

However, Olbermann misses another startling result from this poll. A whopping 17% of voters age 18-29 said they thought that violence against the current American government is justified, the very demographic from which alleged Tucson shooter Jared Lee Loughner sprang. Interestingly, results across the next two demographic groups were consistent at 3%, with a jump to 8% for voters over 65.

There’s probably not a lot of crossover between the Tea Party result and the 18-29 result, either. A Gallup survey from last year showed 18-29 as the Tea Party’s smallest demographic. It would appear that there are a bunch of pissed-off Tea Partiers, and an even bigger, different group of pissed-off young people.

There probably were some areas of crossover in other parts of the survey. Independents polled at 10% on the question, but a lot of them are probably Tea Partiers who disdain the GOP establishment. Finally, 13% of people making under $30,000 a year also thought that violence against our government is justified, a good portion of whom, it logically follows, are in that younger demographic.

What does it all mean? Well, it doesn’t mean that our youth are all Loughner-esque ticking time-bombs, nor are the Tea Partiers. What it does mean is that this tragedy has caused us to ask questions that we weren’t asking before, and we shouldn’t ignore the answers. One in six young people think that violence against our own government is justified, and almost one in seven Tea Partiers agree. Either our government has to stop deserving violence, or someone needs to calm these people down.