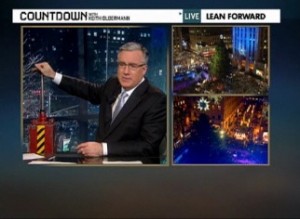 Everybody wants to be something else. In Countdown host Keith Olbermann‘s case, there seems to be a frustrated vaudevillian trying to get out. On Tuesday’s show, Olbermann made an admirable attempt at a spit-take, but later in the show, chose an inopportune moment to stretch his funny bone. In the middle of an important segment about a movement to sanitize Southern secession of its connection to slavery, he interrupted guest Clarence Page to indulge in some prop humor that would even make Carrot Top cringe.

It’s a running gag on Countdown that Olbermann is charged with lighting the Rockefeller Center Christmas tree, and the giant Wile E. Coyote plunger that he uses to synchronize the gag with the (unrelated) lighting of the tree is a cute touch. Unfortunately, placing the gag smack dab in the middle of a segment about (just the latest) attempt to revise the slavery right out of Confederate history was a jarring mistake.

Here’s the full segment, from MSNBC:

Perhaps there is some measure of comedic redemption in the fact that the ad-libbed toss to Rachel Maddow was pricelessly awkward:

Olbermann promises never to do the bit again, but that’s a bit much. Perhaps rejiggering the Countdown lineup  so the bit falls within a fluffier segment would suffice. Tradition, after all, is what Christmas is all about.

The larger segment, though, should be viewed absent the distracting bit,  because this attempt at revisionism is part of a larger pattern, and dovetails with several other issues of the moment. Rep. Steve King, for example, has just compared the settlement of discrimination claims by black farmers to “slavery reparations” offered up by our “very, very urban” President Obama.

Additionally, WMAQ Chicago’s Edward McClelland points out that Mark Kirk‘s (R-IL) election to the US Senate “re-segregates” the legislative body, but also that there have only been four black US Senators since Reconstruction. Three of those four Senators have held that same seat. The Wall Street Journal’s James Taranto counter-intuitively chalks this fact up to the Voting Rights Act, as if there would be more black Senators if there were no “majority minority” congressional districts, or that black candidates are somehow able to control their “transracial appeal.”

Finally, Congressional candidate Rich Iott (R-Ohio 9) fell into some hot water just before the midterms when he engaged in a similar effort to extract historical atrocities from his Nazi reenactment unit.

The fact that these historical atrocities still resonate so strongly today is all the more reason that attempts to trivialize or whitewash them should be given no quarter.