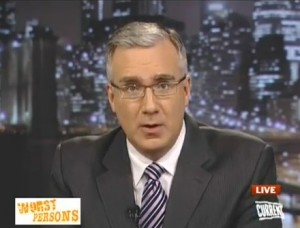 Olbermann’s central point, that Fox News personalities took Hoffa’s remarks out of context to make then seem violent, is a fair one, but his slaps at Ed Henry are unwarranted, and inaccurate. According to Olbermann, “This was started by the mediocre Fox White House correspondent Ed Henry, who quoted merely seven words from the middle of one of Hoffa’s sentences, which were ‘Let’s take the son of bitches out.’ He implied Hoffa was talking about Republicans, and suggesting violence against them.”

Henry made clear during that segment that Hoffa’s comments were references to voting out Republican members of Congress, not to violence. And roughly 20 minutes later, he explained on Twitter that the “full quote” of the “take these son of a bitches out” comment is “Everybody here’s got to vote. If we go back & keep the eye on the prize, let’s take these sons of bitches out”

I can’t read Ed’s mind, but what Olbermann describes as “walking back his rookie mistake” on Twitter appears to be an effort to further contextualize Hoffa, and was likely spurred by the way Megyn Kelly leapt on the quote when he first related it. I’ve always known Ed to be very cautious about sensationalizing, or stirring up undue controversy. If he asked you to get a Coke out of the vending machine, he’d probably add, “But that’s not a knock on Pepsi, and Dasani also has a lot to offer.”

Henry had nothing to do with editing the clip package that Megyn Kelly and panel used to slur Hoffa as a mafioso, and when Henry reported on Hoffa’s remarks later in the day, made certain that the accompanying clip contained the full quote.

Setting aside the issue of Olbermann’s qualifications to judge a journalist like Ed Henry “mediocre,” the inaccuracies in his diatribe undercut whatever valid points he tries to make about Fox News. Olbermann ought to apologize to Henry and correct the record. If not, he should resign.

Give Olbermann a point over Henry (and many others in the media), though, for not referring to the Teamsters president as “Jimmy Hoffa, Jr.” James Hoffa is, indeed, the son of notoriously vanished Teamsters boss Jimmy Hoffa, but he is not a “junior,” as the two have different middle names (Hoffa the elder was James Riddle Hoffa, while his son is James Phillip Hoffa).

“Jimmy Hoffa, Jr.” is a convenient conversational shorthand, but it’s not accurate, and although friends sometimes call him “Jimmy,” that, too, leads to confusion. News organizations ought to differentiate Hoffa from his father the same way he does: by using either “James” or “Jim” Hoffa.