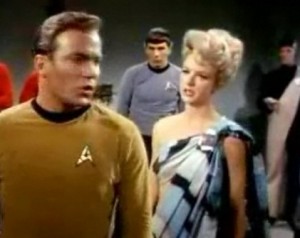 On Thursday night’s Countdown,host Keith Olbermann once again displayed his Trekkie chops, as he used a Star Trek episode to illustrate the idiocy of the current filibuster rule. He compared the painless way Senators can simulate endless debate (without actually having to debate) with the bloodless war from A Taste of Armageddon (which also would have been an awesome name for a disco group), and spoke with filibuster-buster Sen. Tom Udall (D-NM) about his plan to reform the rules.

Aside from quickening the heartbeats of honorary Starfleet cadets everywhere, the use of the Trek metaphor is particularly useful with regard to the filibuster, the explanation of which reads like an official Fizzbin rulebook. The short version is that, currently, all the minority has to do is say the will filibuster, and if there aren’t 60 votes to end debate, the bill is tabled until this changes. Udall’s rule would require the filibusterer to actually filibuster, Mr. Smith Goes to Washington-style.

The segment also takes on the Mr. Smith myth, countering the nobility of the Jimmy Stewart character’s iconic filibuster with the less-than noble reality that the filibuster has historically been used to stand in the way of crucial societal milestones like the Civil Rights Act: (from MSNBC)

From a Trek perspective, the episode A Taste of Armageddon was noteworthy for its use of handheld sonic disruptor weapons that conveniently required no optical laser effects. You just point, the thing makes a noise, and the target slowly catches fire like a pile of moist fireworks. Worst Trek weapon ever!

The Countdown segment also prompted me, Pavlov-like, to re-watch the episode on Hulu, during which I also noticed that Spock refers to his people in this episode as “Vulcanians.” Although technically a goof, it actually makes more sense than calling people from Vulcan “Vulcans.” This would be a bit like a President opening his remarks with, “My fellow Americae…”

As for the filibuster, there are many who view this rule change as a risk that could boomerang on Democrats once they find themselves in the minority, a valid point. This question shouldn’t be decided on its convenience to the current political landscape, but on the merits of allowing the minority to maintain such an iron stranglehold on legislative progress. The new rule won’t completely marginalize the minority, but it will force them to make their case for obstruction in daylight.

In the modern media world, that’s a brilliant glare, and the end result should be that the party with the best ideas (and the strongest bladders) eventually succeeds. On that basis, either party’s objection should be judged according to that measure, the ability of their ideas to withstand that glare.