Keith Olbermann’s Donations Violate At Least One Set Of Ethics Rules: His Own 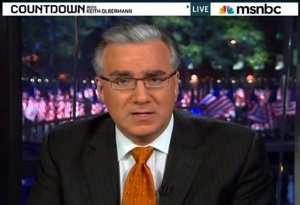 Keith Olbermann broke his non-Twitter silence last night on the matter of his suspension, alleging that he “knew nothing about” the NBC policy requiring approval for personal campaign donations from MSNBC anchors. His note was as candidly appreciative to fans as it was backhandedly scathing to those permitting him to return to air tonight, but rings inconsistent with the some of the anchor’s previous statements.

The Olbermann version of why he was suspended goes something like this: Olbermann decided to make some political contributions directly to candidates this year. He had no intention of keeping those donations secret. When asked about them, he was eager to answer any questions as to the legality of the matter. At the time, he “knew nothing about” the fact that his employer had certain rules about donations and that the process by which he donated violated their policy. That policy, he further explains, is “inconsistently applied”– making it even more difficult for him to know how to follow it. Despite being willing to publicly explain himself, and being “assured that no suspension was contemplated,” he was suspended– news broken to him by the media.

Olbermann’s detractors, especially those within the confines of NBC, will probably have much to parse in this statement. There are three allegations in it, at least, that fall within the scope of the outrageous if true: that MSNBC selectively applies ethics policies, that Olbermann had no idea he was violating a rule, and that he was suspended after being promised he wouldn’t be while the media was told he would.

Network politics aside, Olbermann’s expression of assertive comfort with what he did appears particularly inconsistent with what he has held to be his own brand of personal ethics. There were his lashings of Juan Williams and Rick Sanchez for allegedly violating their company policies (or, in the latter case, finding a really weird way to be offensive). There were his myriad railings against Fox News for allegedly having a political agenda, one that rendered their news reporting worthless. And, of course, there was his claim on The View in 2008 that he didn’t vote because doing so would compromise his journalistic integrity. Even if political donations were allowed by his employer, and even if he did nothing outside the realm of the law– public or private– he violated rules he personally applies hard and fast to his political enemies and, two years ago, was apparently quite proud to apply to himself. Unless he can come up with a good reason why someone would donate to the campaign of someone they politically disagreed with, it’s hard to find any distinction between the message sent by a vote for a candidate in a voting booth and money sent to that candidate’s campaign.

It is important to note that it is not a possible inconsistency within his ideology that is in dispute here. One would be hard-pressed to find ideological inconsistencies within the public scope of Olbermann’s political personality, nor do the donations belie them. In fact, if anything, that he donated to candidates that share his views is a sign that he believes what he says, and that sincerity has garnered him praise on both sides of the aisle, from MSNBC regular Ezra Klein (“There’s no evidence that he’s not playing straight with us”) to right-wing analysts like Big Hollywood’s John Nolte (“Olbermann deserve[s] credit for not hiding behind the cloak of lies found in the words ‘objectivity'”).

It is not belief but behavior which is in question here. Actively engaging in politics contradicts a consistently exhibited belief that actively engaging in politics poses an ethical threat for newspeople. Few are likely to agree with Olbermann that a pundit who votes is untrustworthy, but if he chooses to believe and promote that notion, it is hypocritical for him to donate to any campaign and claim journalistic integrity. His subjective ethical views, far from any generally recognized beliefs– or even NBC company policies– should have tipped him off that, perhaps, donating to a campaign is at the very least as biased an act as pulling a lever in a voting booth. And it’s precisely that which makes his claim of ignorance so difficult to believe.

Olbermann will be back on the airwaves tonight, where he will surely speak in his defense and, perhaps, clarify his potentially problematic statements of past and present. Until then, based solely on last night’s statement, he has an uphill battle to wage if he wishes to regain the full trust of anyone but his most zealous fans.