Olbermann’s Special Comment: “My Father Asked Me to Kill Him”
video

Olbermann’s Special Comment: “My Father Asked Me to Kill Him” 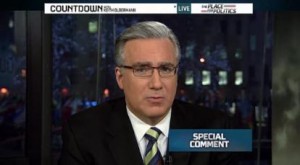 In the same show in which he attacked Mediaite by taking a shot at this site’s founder, and the day after an even cheaper shot at Sarah Palin, Countdown’s Keith Olbermann also displayed a return to form with a Special Comment that was about as riveting a 13 minutes of television as you are likely to see.

“Last Friday night, my father asked me to kill him,” he began.

What followed was more than just a piece of political commentary, it was a gripping, heartrending story. If you must, ignore the fact that this segment finally lays to rest the myth of the “Death Panel,” and just listen as a human being.

While some might construe this as an attack on conservatives, I submit that the villains in the effort to reform health care are numerous, and multi-partisan. While Sarah Palin initiated the “Death Panel” hysteria, it was the mainstream media that abetted her, and a handful of Democrats who lacked the sac to leave the provision in the bill. The same dynamic holds true of the larger picture of health care reform.

No matter your point of view on health care, you would have to at least agree that Keith’s story is effective at conveying the idea that we have to do something, that the status quo is unacceptable. When the bravado and the posturing are set aside, we agree more than we disagree.

There may be some who will accuse Keith of manipulation here, or worse, exploitation. This has become a popular way of dismissing powerful stories that challenge our worldview, and it’s cheap. Keith Olbermann, whether you agree with him or not, is obviously exposing something deeply personal, in a sincere effort to make this ordeal have some meaning. How you take it in is your business, not his.

I think this also demonstrates why Keith Olbermann should make an effort not to lower himself, not to be petty or cheap. In this case, many people who could have benefited from hearing the story of Keith’s father now will not. The idea isn’t to be neutered, witless, and inoffensive, as much as it is to use the passion and the biting wit on worthy targets, in a worthy fashion.

Finally, it’s my hope that everyone who reads this will keep Keith’s dad in their thoughts and prayers, just as you would hope for the same were it your loved one who was suffering.