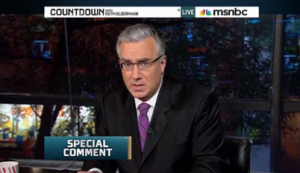 Somewhere in America, there are real stories. There are real problems and there are real conversations to be had. Unfortunately, the media always seems to find something else to talk about. It’s always the same series of events too: one side goes crazy over an insignificant, overly politicized topic and the other side goes crazy over the fact that the first side is going crazy to begin with. Soon that topic is all anyone can talk about. This week, that topic is the “Ground Zero Mosque” and like every insignificant, overly politicized topic that we shouldn’t be wasting our time with in the first place, it was perfect gristle for a classic Keith Olbermann Special Comment.

From the beginning, when Olbermann evoked the oft-quoted “First they came” speech by Pastor Martin Niemöller and pointed out that blocking a building is not at all like the Holocaust (unless it totally is, right, Keith?), it was clear that he was on a roll. However, something funny happened as he continued. Oftentimes, Olbermann’s super serious tone in these special comments makes him sound ridiculous but, here, it just pointed out how absurd the whole argument is. Olbermann used a kitchen sink approach, throwing in one point after another (it’s not at Ground Zero and it’s not a mosque, prejudice and violence against Muslims is becoming a big problem, Religious freedom is an inalienable right in this country) but, really, he shouldn’t have needed more than one.

As Rachel Sklar pointed out in her great essay this morning, it’s just not that hard. Muslims are not trying to take over this country. The vast majority of them just want to become doctors or get better roles in movies. It really doesn’t matter if people are unhappy about the community center (again, it’s a community center) or, for that matter, if the Muslims who build it are unhappy about Greg Gutfeld’s gay bar. If they want to build it, they can. End of story. Let’s move on. There are other problems in this country.

Olbermann was right the first time; obstructing the construction of the community center in Lower Manhattan is nothing like the Holocaust. The Holocaust is something worth talking about for the rest of time. This is a distraction we all need to forget.