Kelly to Bill Ayers: ‘What Would It Take to Make You Bomb This Country Again?’ 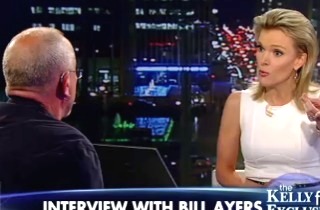 Megyn Kelly aired part two of her big Bill Ayers interview tonight, and in it she asked more about his involvement in bombings, his relationship with President Obama, and what it would take to get him to bomb the U.S. again.

Ayers said that he moderated the Weather Underground after a time, but Kelly repeatedly pressed him on whether a more moderate message actually stuck with its younger members. And Ayers even admitted that “we should have destroyed more property” back then in their attempts to protest and fight back against the “genocidal war” in Vietnam.

Ayers repeatedly disputed quotes and claims Kelly brought up, including a reported quote from his wife in The New York Times appearing to praise Charles Manson. Ayers said, “The New York Times? They lie daily.” He insisted his wife was just “mocking” America’s fixation on Manson over Vietnam.

As for his infamous ties to President Obama, Ayers said he barely knew Obama when he was running for president, and even bemoaned the fact that Obama isn’t more like him and hasn’t tamped down on his aggressive foreign policy.

Kelly then asked him a big question: “What would it take to make you bomb this country again?” And Ayers actually admitted he “can’t completely say no” to the idea of taking drastic action against the United States in the future if the need arises.