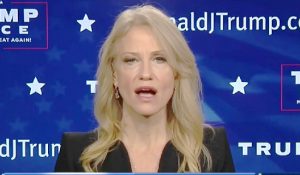 During an appearance on CNBC’s Squawk Box this morning, Trump campaign manager Kellyanne Conway claimed that she’s personally witnessed Donald Trump write checks to charity. She also indicated that Trump running for president is itself a charitable act.

Conway was asked about Trump’s charitable giving, with the hosts bringing up billionaire David Tepper’s recent slam on Trump for not doing anything after Superstorm Sandy. The Washington Post’s David Fahrenthold’s reporting was also brought into the conversation, who has failed to find any substantial charitable donations from Trump personally.

When asked if she could rebut the charges that Trump hasn’t given anything, Conway responded by saying that she’s seen him do it with her own eyes.

“He’s a very generous man,” Conway said. “I have seen him write checks and I have been there when he is writing checks to people.”

Fahrenthold, when tipped off at her appearance and comments, sent the following tweet.

Wow! @KellyannePolls, this is the last day to give details of those checks you've seen @realDonaldTrump write. Not too late. https://t.co/PTlL6TJJWz

Watch the clip above, via CNBC.