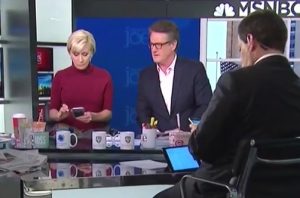 Top Donald Trump advisor Kellyanne Conway immediaitely responded to the Monday report from MSNBC’s Morning Joe that Trump was angry at her by texting the hosts to say the claim was false and “sexist.”

The Morning Joe hosts reported earlier that Trump was “furious” with Conway after she continually and publicly criticized his decision to meet with Mitt Romney during his White House transition. Top Trump aides likewise criticized Conway, telling MSNBC that “Kellyanne went rogue at Donald Trump’s expense at the worst possible time,” and, “Instead of driving Donald Trump’s message, she’s pushing her own agenda.”

Conway then sent an angry text message to host Joe Scarborough, which he read out loud on the air. “We have a response from Kellyanne Conway who says the reporting this morning, it is sexist,” he announced. “She says she can have any job she wants and is thinking about taking a role inside and outside of the campaign.”

“I’m not sure how that reporting is sexist because those were sources at the top of the campaign,” Scarborough said. “Is she suggesting that the people that she’s working with, the three people at the top of the Trump transition campaign, are sexist? Because that’s where all the sourcing comes from, the people closest to Donald Trump.”

“I don’t understand. What’s sexist? Why are they sexist for saying this?” he demanded.

“I believe that if Reince Priebus had done what she did, people would be raising the same questions,” Bloomberg’s Mark Halperin agreed. “And as best I know, he’s not a woman.”