Kerry Defends Iran Deal to ABC: ‘Can’t Always Start Where You Want to Wind Up’
VIDEO

Kerry Defends Iran Deal to ABC: ‘Can’t Always Start Where You Want to Wind Up’ 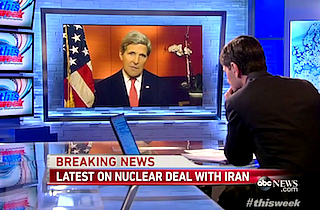 Secretary of State John Kerry spoke to ABC’s George Stephanopoulos Sunday morning about the hours-old compromise brokered between the United States and Iran about halting (but not dismantling) the latter country’s uranium-enrichment program, which has been both hailed as an historic breakthrough and denounced as a reckless concession.

“This negotiation is not the art of fantasy, or the art of the ideal,” Kerry said. “It’s the art of the possible, which is verifiable, and clear in its capacity to be able to make Israel and the region safer.”

Kerry enumerated the planks of the deal, which include the destruction of Iran’s 20% enriched-uranium, a freezing of the 3.5% uranium stock, a halting of centrifuge development, and daily inspections, all in exchange for a lessening of sanctions.

“The choice people have is, do you want to sit there and argue that you have to dismantle your program before you stop it—and while you’re arguing about dismantling it, they progress?” Kerry asked. “In 2003, Iran made an offer to the Bush administration that they would in fact do major things with respect to their program. They had 164 centrifuges. Nothing has happened. Here we are in 2013: they have 19,000 centrifuges and they’re closer to a weapon. You cannot sit there and pretend that you’re just going to get the thing you want while they continue to move towards the program that they’ve been chasing.”

“We’ve actually succeeded through the sanctions that Congress put in place to be able to get to a point where we’re locking in, knowledgeably, what their current level is and forcing them to go backwards,” Kerry continued. “And while we go through these next six months, we will be negotiating the dismantling, we will be negotiating the limitations. You can’t always start where you want to wind up.”