Olbermann Is Neither Fair Nor Balanced On Obama’s Spending Freeze 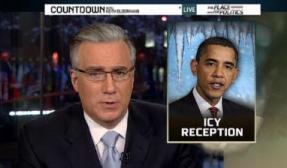 Isn’t Countdown host Keith Olbermann supposed to be inside some kind of tank for President Obama? That’s what I keep hearing, but you wouldn’t know it to watch his segment on the POTUS’ proposed SOTU spending freeze. It’s one thing to say that the freeze is a gimmick and a bad idea, but quite another thing to not tell the whole story. For a guy who constantly mocks Fox News’ “Fair and Balanced” slogan, Keith displayed a marked lack of both.

About 2 minutes into this clip, Keith points out that it was Senator John McCain who proposed a spending freeze during the 2008 campaign, only to have the idea “heartily rebuffed” by Obama. Then, he plays the same clip everyone else is playing to illustrate how candidate Obama opposed a spending freeze, while President Obama proposes one:

What’s missing from Keith’s segment is the fact that what candidate Obama said at that debate is exactly what he’s saying now. From ABC News’ Jake Tapper:

But there is a key difference. Senior administration officials say the freeze they’re proposing wouldn’t be an across the board freeze on every program — some spending would go up, other programs and agencies would be frozen or experience cuts. It would be an overall freeze on the totality of the discretionary non-security budgets from 2011 through 2013.

In the first presidential debate, then-Sen. Obama said in response to Sen. McCain’s freeze proposal, “the problem with a spending freeze is you’re using a hatchet where you need a scalpel. There are some programs that are very important that are currently underfunded.”

In the second debate he said an “across-the-board freeze” is “an example of an unfair burden-sharing. That’s using a hatchet to cut the federal budget. I want to use a scalpel so people who need help are getting help and those of us like myself and Senator McCain who don’t need help aren’t getting it. That’s how we make sure that everybody is willing to make a few sacrifices.”

The White House will argue their proposal is a scalpel.

This isn’t a secret, and it’s not as if every media outlet that runs this doesn’t know that Obama’s freeze differs from McCain’s in exactly the way he said it should. That just doesn’t make for a compelling “Gotcha!”

You would, however, expect Keith Olbermann to afford the President that measure of fairness, especially since it doesn’t damage his central thesis that the spending freeze is a bad idea. You would expect it because this is the same kind of fake flip-flop attack that was used ad nauseam against John Kerry in 2004.

In fairness to Olbermann, Rachel Maddow does the same thing, introducing that debate clip by saying that John McCain lost the election “proposing this idea.” On the other hand, she does an excellent job of showing why Obama’s spending freeze is bad politics and bad policy:

Strangely enough, one of the voices of reason on all of this has been liberal blogger Oliver Willis, whos ort of predicted this in a post called “The Liberal Blogosphere Goes Fox News.” He talks about the “collective pants-wetting” on the liberal blogs when the news of the freeze first leaked:

We saw that on Monday with the leaked story that the Obama administration planned some spending freezes. What we know about the proposal:

* It exists
* Defense spending is exempt
* If/when there’s a second stimulus or jobs bill it is exempt
* Health care reform would be exempt
* It is targeting redundancies, waste, excess, etc.
* The details of what will be targeted have not been released yet

That halfway story seemed to be all liberals needed in order to issue their own Fox News Alerts about the betrayal and then began the parade of frankly embarrassing hysteria.

If you don’t know Willis, he’s very much a liberal “team player.” If he’s calling out his fellows, you know something’s up.

In fairness to Olbermann, I have no idea how much he is involved in actually writing or researching these segments. Keith’s a really smart, engaged liberal, but he’s also a very busy guy, and maybe this fell through the cracks, and he didn’t think to correct it on the air. Maybe he’ll take the time to correct it tonight, before the President’s speech.