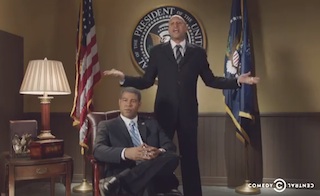 While the general consensus is that most comedy shows have failed in finding a good handle on a President Obama parody, the one impression that has really caught people’s attention is the one from the Comedy Central sketch series Key & Peele. Not only does the show feature Jordan Peele’s calm and collected (and occasionally mic-dropping) Obama, but also Keegan-Michael Key’s Luther, who is Obama’s “anger translator.” The characters, which have become popular enough to get a hat tip from the President himself, showed up in a video used as the intro to the Radio And TV Congressional Correspondents’ Dinner this past Friday. In the clip, they made jokes about Vice President Biden, Fox News in general, and Greta Van Susteren in particular.

Why did Van Susteren get called out? Well, in case you forgot, the comedian Louis C.K. was supposed to be the original host of the event. However, that was during the great “There Are Sexist People Who Aren’t Rush Limbaugh, No Seriously, Please Stop Talking About Rush Limbaugh” Quest of 2012 in which anyone who has ever said anything mean about anyone who owned a vagina was quickly bandied about as loudly as possible. Van Susteren chose the famous comic as the target of her misplaced fury, calling for a boycott if he wasn’t removed as the event’s host. C.K., who has better things to do, responded by getting out of dodge.

The whole thing was a few months ago, but it was so ridiculous that it’s always worth making fun of. In the video intro, Peele’s Obama admitted that he didn’t always agree with the attendees, but valued the freedom of speech. Key’s Luther then sarcastically exclaimed “Unless it’s spoken by Louis C.K.!” following it up with, “You was fucking robbed, Louie!”

Luther also took on Van Susteren’s home network, Fox News, for “doing everything they can to create a society that believes [Obama is] a Socialist Muslim,” joking that the President still has to defend his faith while Mitt Romney doesn’t have to say anything about his belief he’d get a planet when he dies.

And, in reference to the whole gay marriage situation, Luther promised the correspondents that none of them would be allowed to interview Biden in “a long ass time.”

Watch the video below. Below that is the original sketch that Key and Peele originated the characters on.