The killing of 43-year-old Samuel DuBose by University of Cincinnati police officer Ray Tensing has dominated the news this week, especially since the release of body-cam video showing the shooting. At the same time, the killing of 14-year-old Cecil the Lion by dentist Walter James Palmer has become a worldwide outrage, even spurring a petition to extradite Palmer to Zimbabwe to face criminal charges. Cecil’s killing also resulted in a protest shrine at Palmer’s dental office, which featured a sign that perfectly illustrates the way in which these stories intersect. 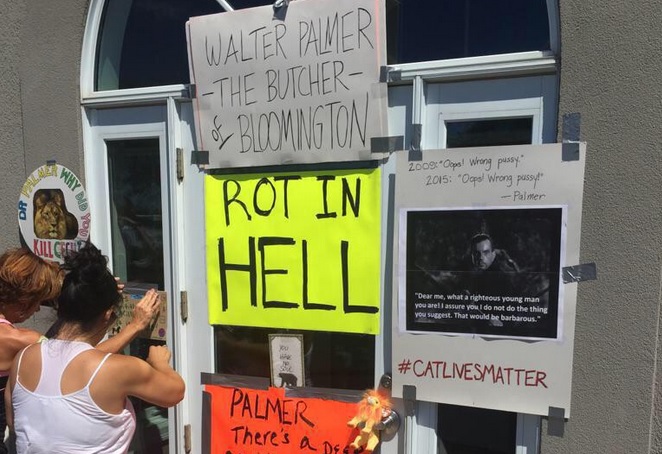 Right next to the sign imploring Palmer to “Rot in Hell” was a sign featuring the hashtag “#CatLivesMatter,” a play on the #BlackLivesMatter movement that has grown in response to a seemingly weekly series of unarmed black victims of police violence.

Even the White House press corps has displayed a similar sense of proportionality, asking several questions about the killing of Cecil the Lion, while only AURN’s April Ryan has asked the White House to weigh in on Sam DuBose’s killing.

The disturbing similarities between these two stories don’t end there, though. It’s just the beginning. As Ted Nugent has pointed out, it is legal to kill African lions, but as several recent analyses of police killings seem to demonstrate, it is all but legal to kill African-Americans, too. In an April analysis of thousands of police-involved killings since 2005, only 54 cases were charged, less than half were convicted, and only 12 times did a fellow officer offer testimony. More recently. The Washington Post’s Wesley Lowery reports that of 559 killings by police so far this year, only four have resulted in officers being charged, and that in all four of those cases, there is video to support the charge.

The DuBose killing has been widely posited as yet another reason to require police to wear body cameras (a policy position that Hillary Clinton staked out months ago), and if the string of incidents that we’ve seen this past year prove anything, it’s that police officers, even the “good apples,” can’t be relied upon to intervene against other police officers to protect the public. The familiar refrain that “99% of cops are good” may apply in most situations, but when it comes to preventing a fellow cop from choking out an alleged cigarette salesman like Eric Garner, or stopping an officer from planting a weapon on Walter Scott, or keeping Freddie Gray safe during a van ride, or telling the truth about what happened to Sam DuBose, there are exactly zero good apples.

The only impediment to scot-free killings of black people seems to be video evidence of the incidents, and even then, not really. Despite clear video of the killings of Eric Garner, Tamir Rice, John Crawford, no officers were charged in those incidents, and even in the few cases that have been charged, I wouldn’t bet heavily against the cops. Police body cameras, which enjoy overwhelming support from the public, seem to offer a coin-flip shot at getting killer cops into court, but that’s where these cases run into another obstacle in intensely pro-cop juries. While it’s clear from the video that Officer Tensing lied when he said he was being dragged by DuBose’s car when he fired that deadly shot into his head, by the time a defense attorney gets through selling the jury that “split-second decision” narrative to the jury, there’s no telling what they’ll decide.

Or maybe there is. In 2011, South Carolina Police Chief Richard Combs shot and killed 54 year-old Bernard Baily in a dispute over a broken tail light ticket that Combs had issued to Bailey’s daughter. Combs was finally indicted in the killing in 2014. The details, minus the existence of video, sound awfully familiar:

On May 2, 2011, Combs, the then-police chief of Eutawville, shot Bailey three times as he climbed into his pickup truck in the parking lot outside the police station. Bailey was attempting to leave the station after a heated dispute over a broken taillight ticket given by Combs to Bailey’s daughter seven weeks earlier. On that day, Bailey had attempted to intervene on her behalf alongside the road, and Combs later sought a warrant against Bailey for obstruction of justice but did not serve him until Bailey came to Town Hall on May 2, the day prior to his daughter’s trial. Prosecutors contend it was a trumped-up charge. After being told he would be arrested, Bailey left the office to return to his truck.

Combs followed Bailey into the parking lot to make the arrest but said he became caught in the truck’s door when it began to move. He fired in self-defense and not because of Bailey’s race, the former police chief’s defense attorney said during the trial.

Pascoe, however, argued that Combs wanted to make a display of arresting Bailey and could have requested backup from other officers. He said also that the truck was not moving and Bailey’s foot was found on the brake pedal.

That story was enough to hang a jury in January, and although Combs is about to be retried, his attorney only needs to convince one juror. He’ll ask them “Do you really want a police officer to hesitate, to second-guess himself, when he’s standing between you and a potential threat?”

The same argument will likely work on at least one juror when Lance Corporal Sean Groubert finally goes to trial for shooting Levar Jones after Jones made the mistake of obeying Groubert’s commands to the letter. The whole thing was caught on video, as Groubert ordered Jones to produce his license, and when Jones reached for his license, was shot four times for his trouble:

Body cameras are definitely a necessary step, and over time may have an impact on police behavior, but these incidents show that even when they know they’re being recorded, cops are not deterred from making these poor split-second decisions, and lying about it later. If all of these cases teach us anything, it is that the body cameras must be accompanied by true accountability, in the form of mandatory federal investigations of all use-of-force complaints, as well as mandatory federal reporting of racial profiling data.

Cops knowing that they’re being recorded, and even knowing that they’ll face criminal charges, aren’t enough. The best way to prevent incidents like this is to prevent as much unnecessary contact between police and black people as possible. If Sandra Bland hadn’t been pulled over for trying to get out of a cop’s way, she would be alive today. Dubose’s traffic stop has been described as “chicken-crap” by the prosecutor in that case. The best, quickest way to cut down on these unnecessary stops is to force police departments to report on police stops, and to justify racial stops. It’s clear that there’s no easy way to get these cops to think before they kill, then lie about it, so the next best thing is to get them to think before they pull someone over because of some bullshit.

Of all the presidential candidates, Hillary Clinton has thus far done the best job of articulating policies that respond to these incidents, but even she has kept these positions largely confined to audience-specific situations. As sad as Cecil the Lion’s demise is, it is the death of Sam Dubose, and so many others, that cries out for leadership, and for making these policies a top priority. Having a police force that we can trust and hold accountable is important for everyone, and it’s a matter of life and death for black lives.