Kimmel Fires Back at Olympic Luger: ‘I Make Immature Gay Jokes’ About Lots of Sports 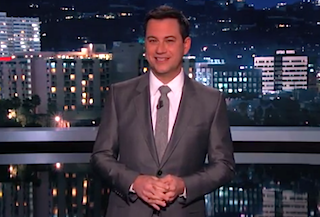 When American Olympic luger Matthew Mortensen accused Jimmy Kimmel of making too many gay jokes about his sport, he probably did not think he was going to get a personal response from the late night host the next night. But that’s exactly what happened during Kimmel’s monologue Wednesday night.

It all started with a viral ad from the Canadian Institute of Diversity and Inclusion, which used the sport of double luge to challenge Russia’s anti-gay laws. As the ad, which has racked up more the 5 million views on YouTube, says, “The Games have always been a little gay… Let’s fight to keep it that way.”

While the ad may have caught on with the public at large, it has been criticized by members of the American Olympic luge team for unfairly mocking their sport. “For some reason, whether it’s Jimmy Kimmel or Conan O’Brien or anyone, doubles luge is always the target,” Mortensen told The New York Times. It’s never about football players taking a snap or whatever. We’ve heard all this stuff before.”

“They don’t like their sport being depicted as gay, even though it very clearly is,” Kimmel told his audience last night. “How do you not make fun of a sport that is essentially high-velocity spooning?”

Defending himself against Mortensen’s accusations, Kimmel said, “I can’t speak for Conan, but the fact of the matter is I make immature gay jokes about athletes almost every night on this show.” To prove it, all he had to do was show a clip from Monday night in which he joked about football players in “tight pants piling on top of each other.”