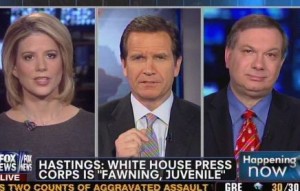 This afternoon’s Happening Now “Fox News Watch” panel took on Michael Hastings‘ report that the press engages in “juvenile and amateurish” behavior when around the president, impeding their ability to ask tough questions.

Daily Beast columnist Kirsten Powers said despite her repeated criticism of the media’s fawning over the president, even Hastings report “surprises” her. “I think we need to hire grown-ups to cover the president,” she said. “This is not acceptable behavior and the fact that you have somebody talking about it, I mean, I think sort of being critical, but he is telling us that these people are incapable of covering the president.”

She went on: “I can’t imagine [Fox News reporter] Brit Hume saying something like this about any president that he has covered. It is beyond the pale.”

National Review columnist John Fund lamented, particularly about the White House Press Corps, “Part of the job, unfortunately, of a White House reporter now is to report the White House’s point of view because you can’t get any other real news, and the problem is if you don’t provide context. That is not being done in the White House. It’s one thing to report what the president believes; another thing not to provide any context.”

“The purpose of a journalist is to hold people in power accountable. I know this is probably a surprise to some journalists today, but that is actually what they’re supposed to be doing,” Powers snarked. “They’re not supposed to be swooning. I wouldn’t swoon if i was interviewing the president. I would go in, I would love to have the opportunity actually, and go in to ask him some tough questions.”

She added: “I don’t understand why people who are around him, maybe not all the time, but enough can’t behave like adults. Really. We need some grown-ups if they can not be around someone who is powerful without swooning.”