Kirsten Powers And Panel Hit Media Hard On SOTU: They Fawn Over ‘Every Stupid Idea Barack Obama Has’
video

Kirsten Powers And Panel Hit Media Hard On SOTU: They Fawn Over ‘Every Stupid Idea Barack Obama Has’ 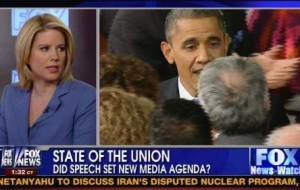 Fox News Watch, Fox’s media bias program, took on the media coverage of the State of the Union and Marco Rubio‘s awkward water bottle moment in his response. Kirsten Powers went after President Obama the hardest, criticizing the media for fawning over every single speech Obama says and derisively saying that being a liberal is more than just liking “every stupid idea” the president has.

Jon Scott said that most of the media gave Obama a thumbs up for the State of the Union address. Powers said the media finds every one of Obama’s speeches “brilliant,” when this particular one was “uninspired” and just an assortment of “rehashed ideas.” Scott called out CBS’ Bob Schieffer and NBC’s Savannah Guthrie in particular for their positive commentary.

Jim Pinkerton said many in the media just want to cheerlead for their team and help crush the Republicans while “rooting for the president to succeed.” Judith Miller said the reactions to Obama’s speeches are becoming jsut as predictable as the speeches themselves.

Powers remarked that it’s at the point where “in order to be a liberal, you have to like every stupid idea Barack Obama has.” Cal Thomas quipped that Obama’s biggest contribution to climate change is “recycling old ideas,” while going after Obama for lying a number of times in his State of the Union speech.

Scott then turned to the widespread media coverage of Rubio’s water bottle moment, calling out MSNBC in particular for showing the clip over 150 times. Miller dismissed it as absurd and said the media should have focused on the content of his speech. Thomas said it was more about the media drinking the Kool-Aid than Rubio drinking the water, while Scott and Powers both found it striking that Rubio got more media coverage than Robert Menendez, a Democrat currently caught up in a possible prostitution scandal.