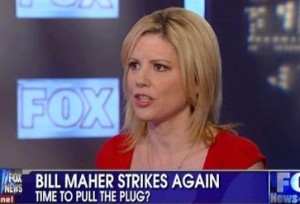 Perennial offender Bill Maher was the topic of conversation on today’s Fox News Watch today, this time for rejecting American exceptionalism. The conversation took a turn when the point was made that, despite his behavior, Maher received a positive profile in the New York Times this week, one Kirsten Powers described as “disturbing” and describing “a person who does not exist.”

“HBO gives him that show, freedom of speech allows him to say all that, but why give him the platform?” host Jon Scott asked, to which Jim Pinkerton responded, “money,” adding that there was “an audience for it” in Los Angeles, which “does say something about where you can make a living in this country.” Scott responded with the point that replacing America with Iran and the Latter-Day Saints Church with Islam would post a much bigger problem for the media, in his opinion, and the panel agreed. Richard Grenell noted that “he’s making these statements in Los Angeles, he’s not making these statements in Cairo” and called his rejection of American exceptionalism “ludicrous.”

The conversation then turned to the fact that Maher had bought a stake in the New York Mets and received what Scott described as a “glowing” piece in the New York Times. Powers was even less charitable, calling it “delusional” and describing “a person that does not exist,” a libertarian for whom atheism was not of the utmost importance. “He’s an Obama supporter– I thought maybe the meant ‘libertine,'” she joked, concluded that given that “he says the most vile things… the idea that he would get a glowing profile is disturbing.”