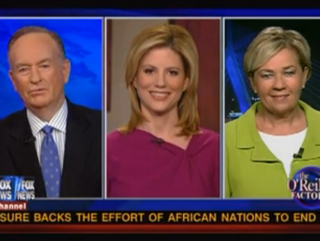 On The Factor yesterday, Charles Krauthammer told Bill O’Reilly he would choose Sen. Marco Rubio has his vice presidential candidate if he were Mitt Romney. To challenge the proposition, O’Reilly had Democratic commentators Kirsten Powers and Mary Anne Marsh on tonight, who disagreed on whether Sen. Rubio would round out the ticket best.

Powers agreed with Krauthammer in choosing Sen. Rubio as the best option, given that he was charismatic and from Florida, and as a Tea Partier, “he can energize the base.” Marsh disagreed, noting that the gender gap in voting necessitated a female candidate, and New Mexico governor Susana Martinez could deliver those votes. O’Reilly was dubious. “Another Sarah Palin? We know how that worked out,” he said, adding he meant no disrespect to his Fox News colleague. Marsh persisted, however, that getting the Latino vote was very important and being able to dig into the President’s support there while also courting the female vote was worth taking the chance.

O’Reilly then shifted gears to President Obama’s energy policy and, specifically, Energy Secretary Peter Chu giving himself an A on policy. “Chu just looks like a dope,” O’Reilly complained, comparing him to a “whiny student sniffing glue in my classroom.” Powers didn’t think he did so bad. “They’re not any more responsible for gas prices than President Bush was!” She made the point that long-term energy strategy and investment was integral to sound policy, and gave Chu an A on that. “I will come back on your show in ten years and you can apologize,” she joked after O’Reilly gave her plenty of pushback.