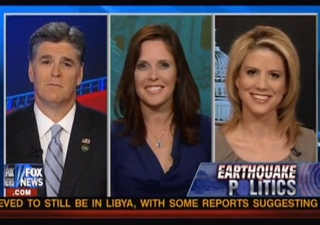 The D.C. area earthquake caused a huge scare in some of the major political centers of the nation, and, Sean Hannity argued, that “crisis” has already been adopted as a talking point by liberals to call for more spending on infrastructure. Citing Rahm Emanuel‘s famous “never let a crisis go to waste” quote, Hannity and panelist Mercedes Viana Schlapp challenged Kirsten Powers to explain where the infrastructure came from and dispute the dubious claim that Democrats “get away with” more name-calling than Republicans.

Hannity began the segment on the infrastructure point, which Powers explained wouldn’t “necessarily be giving money out” but, rather, an infrastructure bank to save up money for when roads and buildings needs repair. “It’s something we need to do anyway,” she argued, though the point didn’t satisfy Hannity. “What do they do with all the money we give them now?” he asked, noting that toll hikes continue throughout the country but arguing they’ve done little to improve the infrastructure.

Hannity then turned the conversation towards a more general direction, noting that President Obama had once called George W. Bush “unpatriotic,” and whether now that the President had spent similar amounts of money, Powers could consider the President unpatriotic, also. Powers didn’t take the bait, however, noting that she was “not a fan of calling people names” and that she disapproved of both sides doing it. This led Hannity to argue that President Obama and Rep. Maxine Waters, as Democrats, can get away with extreme rhetoric while Republicans do not, a point Powers vehemently disagreed with. Schlapp then jumped in to add that the left “goes after Sarah Palin… they go after all these Tea Party figures and at the end of the day no one says ‘what you’re saying is absolutely wrong.”

Schlapp’s point was interrupted briefly by an exasperated Powers interjecting “that’s not true”– she replied after Schlapp concluded her point that the fact that Hannity, Rush Limbaugh, and others have such a large platform proves that liberals don’t get away with the things both Hannity and Schlapp were claiming they were– “plenty of people have plenty to say about it” when those on the left use incendiary rhetoric, she concluded.