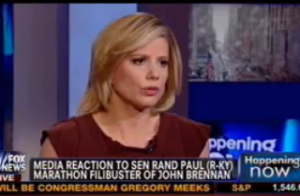 Scott mentioned MSNBC host Lawrence O’Donnell, who dismissed the filibuster as a “fundraising stunt” near the end of his Wednesday night show and the Wall Street Journal editorial that urged Paul to “calm down.” He also brought up The New York Times‘ apparent reluctance to cover the filibuster, with their first major story hitting papers Friday.

Powers, who tends to take a more liberal view on issues, immediately defended Paul against accusations that his filibuster was anything less than serious. “It was a bit of a political stunt,” she admitted, “in the way that everything in Washington is a political stunt. But he had to do this in order to get attention to an issue that has been largely ignored.” Overall, she disagreed with the conception that Paul was “out of control” and found his take on the issue of drones and civil liberties to be “very impressive.”

On The New York Times‘ relative lack of coverage on the filibuster, Powers said the paper’s actions were “deplorable.” And she outright rejected the idea that what Paul was doing had “political” motives behind it. Aside from “someone at MSNBC saying ridiculous things about it being a ‘fundraising stunt,'” Powers said, clearly referring to Lawrence O’Donnell, she felt that “most people agree” that Paul was simply standing up for something “he believes in” and “if there is some political benefit to him so be it.”

Towards the end of the segment, Scott asked Judith Miller what it would be like if this debate on domestic drone strikes was happening under President George W. Bush. “We’d been having impeachment hearings,” Miller responded. “The double standard should be so clear now to everybody.”

The arguments made by Powers and Miller were not unlike those put forth by Mediaite’s Josh Feldman in his column last night. As Feldman said, “Yes, it was a stunt, but all politics is theater anyway, so why not make a show of it and use its powers for good instead of evil?”