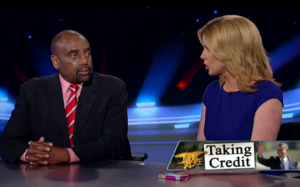 “I didn’t know I was going to be sitting here” with Peterson, Powers said. She then confronted him, saying, “You said women are creating a shameless society, and that they are destroying the family, and they shouldn’t be put in powerful businesses. Address that.”

“Most Americans know that liberal women are destroying the family, they hate men, they hate society,” Peterson responded. Powers replied, “That is absolutely false,” turning to Hannity, asking, “Sean, do I hate men, do I hate you?”

Powers went on: “You are a pastor distorting God’s word for misogyny. What do you mean — when you say women —when you say you leave a woman alone in charge a family and she destroys the family?”

“We allowed the national organization of women who hate men to come in years ago,” Peterson said, to which Powers protested. Peterson continued, “We left them alone, look what condition we are in today; out of wedlock birth, abortion.”

“I have to step in,” Hannity interjected, noting this was not a topic he was anticipating on the show. “You are hijacking the show.” Powers said, “I didn’t know I was going to be on with him.”

Questioning Powers’ outrage, Peterson said, “If you believe what you believe, why are you upset at me? I’m not upset at you.”