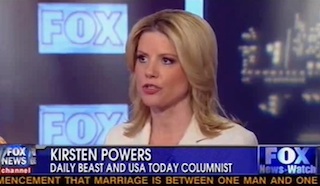 On Saturday’s Fox News Watch, Daily Beast columnist Kirsten Powers took President Obama to task over characterizing his shifting views on same-sex marriage as an “evolution.” Anchor Jon Scott asked Powers why Obama got away with being called flip flopper.

“Well it is a flip flop,” Powers acknowledged. “Of course it is, and I think that they treat it when Romney changes his opinion on abortion, for example, which I think he would say is evolving, they call it a flip flop and see it as this craven move. And when Obama switches his position twice, which really hardly anybody, if anyone even referred to the fact that he used to support it in 1996, and pretty, in a very craven way switched his position. And you know, somebody said this is less evolution and more intelligent design.”

“This is not just some accidental thing that happened,” Powers affirmed.

Powers is not the first political observer to refer to Obama’s “evolution” as a “flip flop”:

PolitiFact also called President Obama out for “flip flopping” last week, saying he “was in favor of same-sex marriage before he was against it — and before he was for it again.”

Obama, a consistent supporter of civil rights for gay couples, nevertheless said as early as 2004 and through 2008 that he didn’t support same-sex marriage. He had written that he believed “that American society can choose to carve out a special place for the union of a man and a woman.” In 2010, he said he wasn’t prepared to reverse himself. This week, the president said he thinks same-sex couples should be able to get married. On the Flip-O-Meter, he earns a Full Flop.