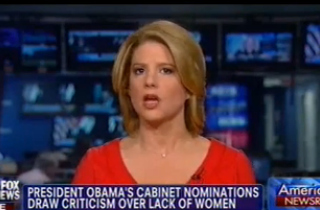 During a Fox News panel discussion this morning, both Democratic contributor Kirsten Powers and Republican strategist Dee Dee Benkie slammed President Obama for his “boys’ club” of a cabinet, contrasting the president’s lack of female cohorts with the 2012 campaign rhetoric largely centered around appealing to women voters.

Host Martha MacCallum displayed the New York Times photograph of the president and ten male advisers in the Oval Office, with Valerie Jarrett blocked out.

“It’s ironic because we know that Mitt Romney had a lot of women in his cabinet, a lot of women advisers. He got a lot of heat for that ‘binders full of women’ comment, perhaps justifiably, it wasn’t the most artful phrase to be sure.” She then asked her female panelists: “What about these pictures and President Obama’s record on all of this given the fact he did quite well with women in the election?”

“I consider myself a feminist,” Powers began, “but then when I watched what went on during the election and the way Mitt Romney was treated, and this sort of hypocrisy where the ‘binders full of women’ was really ridiculed, and he was treated like he was a misogynist.” However, she said, when “you see a picture like this with President Obama, and you have the left basically making excuses for him.”

She cited Ruth Marcus calling the lack of females “bad, but not an outrage.” In response, Powers said, “Really? Because it’s an outrage if it’s a Republican. And I think that this is why when they survey women, and they ask them, ‘Do you consider yourself a feminist,’ most women say no because the feminist movement is just so one-sided. It’s always carrying water for the Democrats.”

“You don’t get extra points for more woman,” MacCallum added, “I just want to see sort of people chosen because they are the best person for the job. I think back to the relationship between Condoleezza Rice and President Bush. She was his closest friend, adviser, and confidant, by many accounts. He never seemed to seek points for that. She was a black woman, but that wasn’t really discussed.”

Co-panelist Benkie chimed in that after the Obama campaign spent months talking about “how he was going to be better for women and how there was the war on women, and it was all about women,” the president now “owes women” and yet can’t find “capable women” to fill his empty cabinet spots.

Powers then concluded the segment:

“I can tell you, from working in Democratic politics, and having worked in the Clinton White House and so on, that this is something that Democratic women will complain about behind the scenes. If you look at pictures of President Bush, Condoleezza Rice is always by his side. You look at a picture after 9/11, it has Karen Hughes, Mary Matalin, Condoleezza Rice in the picture. Bill Clinton’s inner circle were all men, pretty much mostly white men. And I think the issue is that if you’re going to go out and claim that you are the party of women, I mean give me a break. There is no women? It’s ridiculous.”