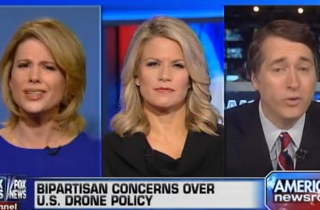 Host Martha MacCallum set the debate up as whether the federal government needs more oversight for the drone program, which has effectively given the president powers of judge, jury, and executioner. Noting that “nobody shed too many tears over [terrorist leader killed by drones] Anwar Al-Awlaki,” MacCallum asked the panel for their thoughts.

“People should shed tears over how Anwar al-Awlaki’s son was killed,” Powers began, citing the 2011 killing of al-Awlaki’s Colorado-born son in a drone strike. “He was never accused being associated with al Qaeda. And according to Robert Gibbs, just should have chosen a better father.” The teenager, Abdulrahman al-Awlaki, was killed in a separate drone strike from the one that killed his known terrorist father.

“He was an American citizen,” she continued, “and there needs to be some sort of due process where something like a FISA-like court where the president has to make the case. It shouldn’t be just bureaucrats.”

Lowry then chimed in that, historically, presidents have made decisions as to who is targetable, but “what makes us feel different is the drone program is often hitting people outside of traditional battlefields in Afghanistan or, say, in Iraq,” Lowry responded. “It is targeting very specific individuals for assassination. So, more oversight? Absolutely. Let Congress weigh in on this. Congress can set out what it thinks the process should be. It can set out the way the executive branch would report back to Congress which would do its oversight, but getting judges involved I think is a very ill-considered proposition both pragmatically and how it would work.”

MacCallum then asked the pair for their thoughts on the “collateral damage” from drone strikes, i.e., that people who aren’t necessarily affiliated with any terrorist activity are killed during the targeted assassination.

“I reject the term collateral damage,” Powers responded. “These are human beings who are killed. I know that is how we talk about it, but they are no different than we are. These are people who have done nothing wrong being blown into pieces by American drones and I think, you know, I agree there needs to be oversight.”

“Are you saying, as a blanket matter, all the people targeted by drones have done nothing wrong?” Lowry asked.

“If you’re in Yemen, stay away from al Qaeda operatives,” Lowry shot back. “Don’t drive in cars with them.”

“Really, Rich?” an incredulous Powers asked. “A 16-year-old should be killed because they happen to be near somebody who the U.S. says is bad?”

“By that standard, you could never conduct any war ever,” Lowry said.

“That is ridiculous,” Powers fired back. “That is not true. That is absolutely false.”

Irritated with Lowry interrupting her, Powers asserted, “Could you stop interrupting me for five seconds? I’m saying don’t refer to human beings who are innocent…”

“Stop interrupting me!” she said. “I’m trying to finish a thought.”

MacCallum then intervened to end the segment, remarking on the panelists’ passion and that “we could talk about it a lot longer.” Lowry chuckled while Powers stared in disbelief over the treatment she received from him.