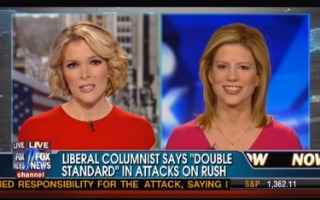 On Monday, Daily Beast columnist Kirsten Powers visited America Live to discuss “Rush Limbaugh Isn’t the Only Media Misogynist,” her column addressing what she views as a double standard in the way misogynistic statements are handled. Are liberal media personalities held to the same standard as their right-leaning peers whenever they make misogynistic statements? Powers thinks not.

Powers focused on Bill Maher, who has had a history of making disparaging and sexist remarks about women like Sarah Palin and Michele Bachmann, yet whose show still benefits from a steady stream of influential liberal guests — including feminist icon Gloria Steinem.

Powers shared that one reaction she’s gotten from her article is that it’s “ok” to make such comments about public figures like Palin, but not “private citizens” like, say, Sandra Fluke:

What’s been particularly upsetting to me, Megyn, is the response that I’ve gotten to this article, which is, “Oh, it’s so different! It’s ok to call Sarah Palin all those words because she’s a public person, but this other woman who was in front of the, you know, hearing on the contraception, well, she’s a private person.” It’s, like, oh I’m sorry, it’s ok to call someone the c-word if they’re a public person? When did that happen? If people start calling Nancy Pelosi that, everyone would just go, “Oh, well, she’s a public person. Oh well”? You know, it’s not ok.

Powers’ major issue is that these “gender-specific,” “particularly nasty” attacks on women by men in the media are seen as permissible. Because ultimately, she says, “this isn’t really about misogyny, it’s about the Democratic party,” and specifically “a proxy war for the Democratic party.” The backlash against Rush Limbaugh, then, is less about real ire for his misogynistic comments and more about the fact that he’s a conservative media personality.

I’m going to have to say… On Bill Maher’s show, he had a less than kind word for me at one point, and Jane Harman, a Democrat who was sitting there, put him in his place. Gloria Steinem, sitting on the couch? Not so much.