Kirsten Powers to O'Reilly: Obama 'Give Back' Nobel Prize
VIDEO

During Heated Syria Debate, Powers Tells O’Reilly Obama ‘Should Give Back’ Nobel Prize 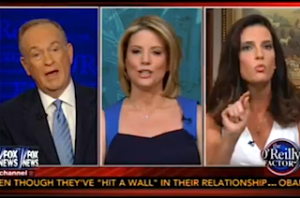 Wednesday night on The O’Reilly Factor, Bill O’Reilly used a question from a Swedish reporter at this morning’s G-20 press conference to ask if President Obama should “give back” his Nobel Peace Prize now that he’s advocating military action in Syria. Fox contributor Kirsten Powers went even further, saying Obama “should have given it back a long time ago.”

Powers said she thought the president should return the prize “for the drone war, for escalating the war in Afghanistan, having all these people die unnecessarily. Plenty of civilians have been killed by his drone war, including children.”

Taking Obama’s side in the argument, O’Reilly countered with, “you know every war in the history of mankind has resulted in collateral damage and civilian casualties.”

“First of all, I don’t use the term collateral damage because they are human beings,” Powers shot back. “I think that the war should actually be accomplishing something and I don’t think that the drones were accomplishing anything.” Instead, she said “it’s created more terrorists.” She said she may have been in favor of going into Syria earlier on but doesn’t “understand why there is a moral imperative now but there wasn’t a moral imperative a year ago.”

Republican strategist Kate Obenshain agreed with more of what Powers said than she thought she would, saying Obama “basically won the election saying he didn’t believe in military intervention unless there was imminent threat to our national security,” but now pushing for action in Syria. She found herself in a heated debate with O’Reilly for saying the U.S. should not intervene because “seven out of nine of the factions against Assad right now is Al Qaeda and the Muslim Brotherhood.”

If that’s the case, O’Reilly wanted to know if Obenshain thinks Sen. John McCain is “trying to deceive the American people.”

“I am saying that he is understating Bill, intentionally, to further his own objectives,” Obenshain responded.

Powers, who had been quiet for several minutes, dropped into the conversation to ask, “Has John McCain never been wrong about anything?”