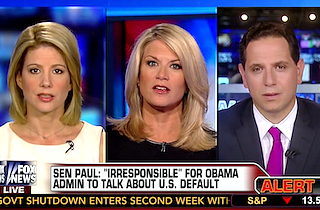 Fox News contributor Kirsten Powers and guest Tony Sayegh sparred over the past and future of the debt ceiling on Fox News Monday morning, with Sayegh and host Martha MacCallum arguing that the threat of default was the perfect spur for President Barack Obama and Congress to negotiate new spending practices, and Powers arguing that budget concessions had already been made and that the Republicans were negotiating in bad faith.

“Democrats have agreed to stay at sequestraition levels, which is something that was not popular,” Powers said. “This is not the budget they want, and this is not popular in the Democratic caucus. It’s something Nancy Pelosi (D-CA) had to bring them around to agree to. So I wouldn’t say there aren’t any concessions going on. In terms of the negotiations, I think the president will end up negotiating over the debt ceiling. I think what he’s trying to stop is this brinksmanship of every time the debt debate comes up, it feels like the government is being held hostage.”

“But if you don’t have that discussion,” MacCallum said, “then you’re going 17, 18, 19, 20 where’s the end of the trillion dollars of debt? When this question comes up, it’s an important time to think about how much you’re spending, is it not?”

“The idea that there’s some middle ground the Republicans are trying to reach, there’s some negotiation that they’ve offering up—I haven’t seen it,” Powers replied. “What’s the negotiation? Even over the government shutdown: the big negotiation is, ‘We’re going to defund ObamaCare.’ That’s not a negotiation.”

“The president’s position not to negotiation is indefensible,” Sayegh said. “There’s one thing both side agree on. Default would be devastating. So let’s take it off the table. The president gets enough revenue into the federal treasury to pay our interest payment. That is the only way you default, is by not paying that. Which is why you had Republicans after the 2011 debt ceiling showdown pass the Full Faith and Credit Act in the House, that mandates the president pay that payment, and allows the executive branch to prioritize other payments. Democrats refused to take it up in the Senate, and the president even threatened a veto if it passed Congress.”

“If that’s true, why did Ronald Reagan say there was a prospect of default if they didn’t raise the debt ceiling?” Powers responded.

“Ronald Reagan negotiated, Kirsten,” Sayegh said. “We agree that default is disruptive and should not be on the table. The reality is the debt problems are much more long term. These are structural problems with our entitlements and other spending programs we have in this country, that’s driving our debt and deficit. Those are going to take some time to hammer out, which is why in 2011 you saw the two sides try to do a grand bargain. The president won. He got his way on the fiscal cliff, he got his way on sequestration. This time the can can’t be kicked down any further. John Boehner (R-OH) has said if we are going to solve this problem, let’s do it comprehensively, let’s at least get both people at the table, talking. The president refused to do so.”