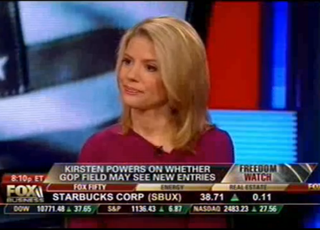 With the Fox News/Google Republican debate of last Thursday taking ahold of most news cycle stories– particularly Rick Perry‘s crash and burn performance– the urge to consider a loss for Perry an instant win for Mitt Romney quickly appeared. On last night’s Freedom Watch, host Judge Andrew Napolitano asked Kirsten Powers to handicap the frontrunners and, given that President Barack Obama was a “terrible debater” at this point in time, she wagered it would take much more than this debate to get the Romney campaign up in front.

Judge Napolitano opened up by showing where polls were in the Republican party in 2007, when Rudy Giuliani and Fred Thompson were the talk of the town and Sen. John McCain was in third place– where Rep. Ron Paul currently happens to be. To that end, Judge Napolitano wondered if Rep. Paul had a shot, and whether a libertarian could be taken seriously.

“The ideas are being treated as mainstream,” she replied, “but [Rep. Paul and Gary Johnson] aren’t being treated as mainstream.” She added that Rep. Paul himself was an “oddity” while his fiscal ideas were not, partially due to the fears that his foreign policy ideas are off the rails. That said, the Judge expressed some hope that it was possible for them to be included in the dialogue in a serious way, pointing to the “great deal of respect” Sean Hannity gave Rep. Paul on his program after Thursday’s debate.

Judge Napolitano then turned to the frontrunners, asking whether Perry’s performance was sufficiently weak for Romney to celebrate. Powers put some cold water on that with memories from 2007: “at this point, Barack Obama was truly a terrible debater.” Romney was definitely not hurt by Perry’s fall, but for Powers, it would take more than one faulty debate. “He has to be flawless, Romney, and he really needs Perry to really stumble and really alienate himself and make people feel like he’s just not ready for primetime.”

The clip via Fox Business below: