Kirsten Powers: Young People ‘Should Not Plan’ On Ever Receiving Social Security 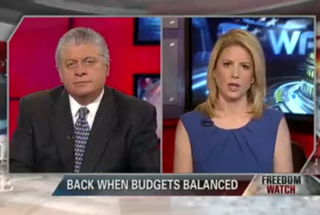 With the national debt and the federal financial crisis at the forefront of the congressional policy debate, the rhetoric from some on the right predicting a major financial collapse has the nation worried about some of the biggest programs the government runs. Judge Andrew Napolitano took a look back to the last time the country had a surplus last night– the Clinton administration– and, along with the New York Post’s Kirsten Powers, tried to find some tips from the ’90s to bring into the 21st century.

Powers, who worked in the Clinton White House, noted that one of the things working to Clinton’s favor that Obama appears to lack is “a Republican Congress that wanted to do things as well,” characterizing the current Republican Congress as “a lot different” and, to some expect, more difficult to work with. While Judge Napolitano appreciated the fact that Clinton balanced the budget, he was also “furious that they raised taxes retroactively,” something he said the even the constitution of the Soviet Union did not allow.

Powers didn’t quite follow that argument, but noted that it did not take too long for President Bush to undo the surplus he received on his inauguration. “He was running two wars off the books, raising taxes,” Powers noted, “borrowing money to pay for wars and lowering taxes for rich people”– not exactly popular things to do. All that spending severely crippled the federal infrastructure, and Judge Napolitano couldn’t help but ask if “young people today [are] right when they worry they might not get this money back,” referring to Social Security deposits. “I have never thought that I will see any of that money,” Powers admitted, so she couldn’t see how people younger than her could expect it.