Koch Bros. Lawyer Faces Off Against Martin Bashir: Treatment Of Kochs In ‘Far-Left Media’ Is ‘Irresponsible’ 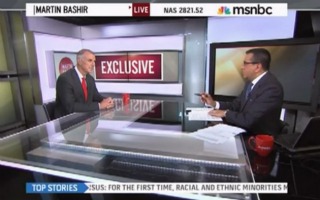 On Thursday, MSNBC host Martin Bashir invited Koch Industries General Counsel Mark Holden on his program. Holden attempted to correct what he described as mischaracterizations that were made about the Kochs by former Democratic strategist Karen Finney, who had said that the Kochs were partially responsible for the murder of Florida teen Trayvon Martin due to their support of Stand Your Ground laws. What followed was a contentious back-and-forth between Holden and Bashir over the political activities of Charles and David Koch.

Bashir asked Holden if Koch Industries supported Stand Your Ground laws, to which Holden said that the Koch’s were “falsely associated” with those laws by Finney who he described as a paid Democratic strategist.

Bashir corrected Holden, saying that Finney had not been employed by any Democratic committee in three years. Holden acknowledged that and said that she then sends out unpaid pro-Democratic fundraising emails.

Holden said that what happened to Martin was a tragedy and it is “despicable that anyone—regardless of their political affiliation—would try to gain some political gain” by linking the Kochs to that incident. He said that the Kochs took exception to Finney’s characterized of them as the “Typhoid Mary” that spread Stand Your Ground laws.

He went on to chastise Finney and MSNBC as a network for editorializing against the American Legislative Exchange Council (ALEC), which has many corporate members. Holden said that MSNBC’s corporate parents, General Electric and Comcast, are members of ALEC. He also said that no one, including ALEC and the Kochs, were involved in the passage of Stand Your Ground laws in Florida.

Bashir corrected him again, saying that Finney was employing an analogy when she said that the Kochs played a part in the death of Trayvon Martin.

“A poor analogy,” interjected Holden. “She didn’t call us the Virgin Mary, she called us the Typhoid Mary.”

Bashir attempted to force Holden to admit that the Kochs support Stand Your Ground laws, to which Holden said that he didn’t know what they support and that Koch Industries involvement in legislative reform is limited in scope.

Just because you’re a member of a group doesn’t mean you’re supportive in every aspect of a group. For example, Common Cause, Sierra Club, Center for American Progress — they have many members on the left – they all sponsored a very violent, hateful, racist seminar—protest in front of our seminar in January 2011 in Palm Springs. So, I think that those groups would not support that—all their members.

Bashir asked why the Kochs have not made steps to distance themselves from states with those laws and organizations like ALEC that support them.

“Have Comcast and GE done that,” asked Holden.

“They’re your parent,” said Holden. “It’s not clear what roll if any these laws played in this tragic shooting.”

Bashir played a famous mock telephone call by an activist pretending to be David Koch to Wisconsin’s Republican Gov. Scott Walker. Walker had a friendly conversation with the Koch impersonator.

“What was that phone call worth to Scott Walker,” Bashir asked.

“I have no idea what you’re asking,” said Holden.

Bashir asked how much the Kochs have contributed to Walker’s recall election fund. Holden said that he did not know.

“Right. This is not a legal issue if they contribute,” responded Holden. “I’m not involved in that.” He said that the Kochs were drawn into the “Wisconsin storyline” for political reasons as well.

Bashir challenged him on this point, and Holden finally conceded that “our PAC did” contribute $40,000 to Walker’s reelection efforts. Bashir cornered Holden on the eagerness of Walker to take a phone call from David Koch and asked “what does he think he is getting” from the Kochs?

Bashir outlined the number of public campaign contributions to Walker from Koch-related political organizations and asked if Holden believe the people of Wisconsin had a right to know if Koch Industries was bankrolling the election efforts of their governor.

Holden said that the Kochs have been very open and honest about their political believes and “our opponents try to inject us into every story, that’s the issue Mr. Bashir.”

The way that your network has handled issues with us, the way that a lot in the far-left media have handled issue with us—attacking us with no basis like with the Trayvon Martin issues. That has led to death threats against our owners. Charles and David Koch have received phone death threats, email death threats. This is where this leads. It’s irresponsible. Are you okay with that?

Bashir said he was not and said he has also been the victim of death threats.

Bashir attempted to ask about the Koch’s likes to New Jersey Gov. Chris Christie, but Holden seemed unaware of any meeting that the Kochs had with the governor.

“You see that everyone calls for more and more disclosure, and then you see what happens with disclosure comes out and information comes out – there are more violent attacks, more threats against us, terroristic threats against our facilities,” said Holden.

Holden concluded saying that the Kochs would not appear on NBC because he believed that they feel they would not receive “very fair treatment, given what’s happened in the past.”