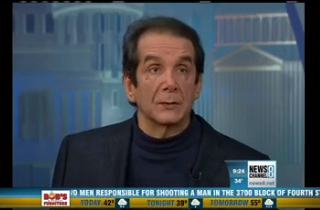 Appearing on Inside Washington this weekend, conservative columnist Charles Krauthammer branded Sen. Rand Paul‘s recent moves as “politically radical” and called him “socially liberal” — terms which are undoubtedly damned in Krauthammer’s mind, despite the latter being patently false.

The roundtable show played a clip of Paul’s CPAC 2013 speech, in which he decried President Obama having signed the 2011 National Defense Authorization Act and its controversial “indefinite detention” provision which allows the government to detain an American citizen indefinitely without charges.

He continued: “What he pulled off with the filibuster was a stunt of political genius because he had the floor, the attention of the country for the whole day. But this was a move that was quite interesting and politically radical.”

So, let’s review: Krauthammer believes Rand Paul made a few “radical” moves based on the fact that the senator opposes the indefinite detention of American citizens? And led a filibuster decrying the administration’s secretive drone policy? As I noted last week, Krauthammer has recently taken to backhanding Sen. Paul by mocking the drone filibuster as “absurd” and lamenting how the outspoken civil libertarian could “undermine” the policy of overseas drone strikes.

Krauthammer continued: “He is very much liberal on social issues. And that is a challenge to the whole conservative movement over the last 30 years. It’s interesting whether or not it’ll get traction. Among the young, I think it will. But I’m not sure how much of a future it has in the very long-run.”

So… Rand Paul is “very much a liberal on social issues”? If only!

Despite being known as “libertarian,” Sen. Paul has repeatedly shrugged that label. And for good reason: when it comes to social issues, he’s very much a conservative.

On abortion, Sen. Paul just introduced the “Life at Conception Act,” which would extend equal protection under the 14th Amendment to the unborn human after the moment of conception. Not exactly a “liberal” position.

Sen. Paul is personally opposed to same-sex marriage, but believes the states should decide their own policies. Again, not exactly a “liberal” position on the issue.

On the drug war, Sen. Paul has similarly disappointed libertarians by saying it should be “left up to local law enforcement” as opposed to openly calling for legalization/decriminalization like his father.

Did Krauthammer confuse “social issues” with civil liberties? Not clear.

If not, though, then Krauthammer seems to believe Rand Paul is a “radical” and a “social liberal” not because of his actual views, but because of the younger, “socially liberal” libertarian crowd that supports him for his staunchly libertarian positions on civil liberties; positions which sit as the antithesis to the Krauthammer view of the world.

Even more interesting: Krauthammer doesn’t believe this wave of younger, more socially liberal support among the conservative movement will last in the very long-run. So does he think the GOP will continue being anti-gay marriage forever? Quite confusing.