Krauthammer: Dems Resort to ‘Race-Baiting’ Because They ‘Don’t Have Any Arguments’ 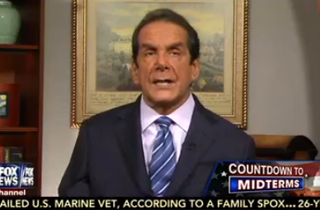 There’s only one reason that Democrats would accuse conservatives of racism in this election cycle, says Charles Krauthammer, and it’s this: “The desperation and the ad hominems come into play when you don’t have any arguments,” he argued on Hannity.

“The 2010 election, the shellacking the Democrats took was about ideology,” he said last night.. “It was about liberal overreach–the stimulus, Obamacare, over-taxation, over-regulation, and we know what the result was. That set off this counterreaction called the Tea Party. And what we’re seeing now six years later is an election that’s not only about ideology. It is a rejection of hyper-liberalism, but there’s now an overlay of sheer incompetence.”

And when you call Krauthammer a racist, well, that just sets him back a few argumentative steps:

I think that when you’re accused of being a racist, you don’t even dignify the accusation with a response because then you’re conceding the premise. I have to prove I’m not a racist. I oppose the president because of his policies, I have since the beginning of his administration. If someone wants to imply on account of his race, I will not give them the dignity of a response.