Krauthammer: From His Perspective, Newt Gingrich ‘Is Like Custer In Little Big Horn’
video

Krauthammer: From His Perspective, Newt Gingrich ‘Is Like Custer In Little Big Horn’ 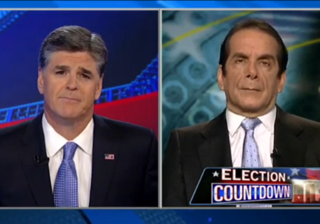 Charles Krauthammer reviewed the performances of the Republican candidates during Thursday’s CNN debate last night, discussing the issue with Sean Hannity. He did not find that either Mitt Romney or Newt Gingrich won the debate, however, instead giving that credit to Rick Santorum, who he noted attacked Romney more efficiently on health care than anyone had before. He did note of Gingrich, however, that he was not fighting personal animus from Republicans, but the fear that he was vulnerable, even if he thought he was General Custer.

RELATED: Krauthammer Deadpans: Pearl Harbor Does Not ‘Do Justice To The Grandness Of Newt’

“Santorum won on points and he sort of won on presentation,” Krauthammer told Hannity, noting that “after nineteen debates, somebody finally nailed Romney on the issue of Romneycare and Obamacare” and that Santorum “went after him like prosecutor.” He didn’t see much of a chance for Santorum, but he noted that the strategy of “wait[ing] around in case one or the other major candidates implodes” was a smart one that Tim Pawlenty could have benefited from. Until said implosion, “live off the land and do well in debates.” As for Gingrich, Krauthammer argued that he had a “terrible night,” and that Romney did well in being aggressive about defending his wealth while Gingrich “caved on every front.”

Hannity then asked about “palpable anger and resentment” between the Romney and Gingrich camps, and noted that he could see how Gingrich could feel abandoned, but “I don’t think it’s personal animosity” that keeps him from being popular. Instead, it is the fear that “he’d be a very weak– because he’s sort of unpredictable– presidential candidate.” Of course, he added, “from his perspective, he’s like Custer in Little Big Horn.”