Krauthammer: Obamacare Is ‘Terrible,’ But It’s Law Of The Land And GOP Govs Are ‘Honorable’ For Embracing It

Krauthammer: Obamacare Is 'Terrible,' But It's Law Of The Land... 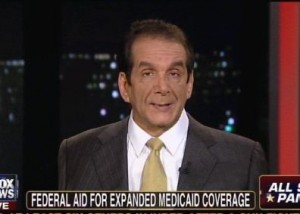 There has been a recent trend of Republican governors embracing the Medicaid expansion provision of the Affordable Care Act, and this week Florida governor Rick Scott became the latest to jump on the bandwagon. On Fox News earlier today, Bret Baier held a panel discussion on this shift, with Charles Krauthammer saying that while the health care law is insolvent and terrible, it is the law of the land, and said that Scott and his fellow governors are making an “honorable” decision for embracing the Medicaid expansion.

The Weekly Standard‘s Steve Hayes said it’s easy to “understand the rationale” of why Republican governors are embracing parts of the health care law, but found it “particularly galling” that Scott, who “made his career opposing Obamacare” and has consistently been one of its most ardent opponents, pulled a surprising 180 this week. Hayes called Scott’s shift a politically “cowardly” decision.

Kirsten Powers argued it is a striking example of the limits of Republican opposition to health care. She said that there has been no real alternative plan offered concerning how to provide health care to poor people. Baier pointed out that the Medicaid expansion was rejected in far more states than it has been accepted in. Krauthammer responded to Powers’ point by saying the health care law goes even further in expanding Medicaid to people who are above the poverty line.

Krauthammer then defended Scott’s actions as “honorable” after his long opposition to the health care law, in spite of personally believing the Medicaid provision in the law is too expansive, and clarified that despite his defense he still believes it to be “insolvent” and “a terrible idea.” Powers said that at least Scott is accepting reality and not just pretending that poor people will “disappear” and solve the problem.

Hayes pointed out no one is talking about how the Medicaid expansion will be paid for, maintaining that it is “unwise” for Republican governors to concede defeat when there are alternatives and that the full implementation of the health care law will end up being a “policy disaster.”