Charles Krauthammer: ‘Rather Pathetic’ To Suggest Presidency Is An Impossible Job 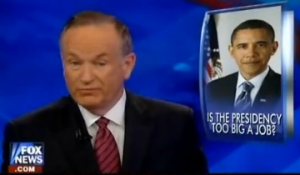 Last week, Newsweek‘s Daniel Stone published a piece with a provocative thesis: that the American presidency “has grown, and grown and grown, into the most powerful, most impossible job in the world.” In other words, says Stone, the presidency is too big a job for just one man or woman to handle alone.

Columnist Charles Krauthammer, however, isn’t buying it. On last night’s edition of The O’Reilly Factor, he called Stone’s premise “actually rather pathetic.” Even more pointedly, he said, “You didn’t hear a lot of this when Ronald Reagan was president.”

According to Krauthammer, Stone’s article is the kind of thing that gets “cooked up in the mainstream media when you have a failing Democratic president.” He cited similar articles written during the Carter administration as proof. O’Reilly, ever eager for a debate, then jumped in and began playing devil’s advocate. “We live in such a complicated world now, Charles,” he said, noting that George W. Bush‘s presidency was also fraught with difficulty—even though Bush had more direct governing experience than Obama.

O’Reilly pointed specifically to the financial crisis as evidence, saying that not even a brilliant person “would have been able to pick up what these banks and investment brokerage houses were doing because it’s so complicated.” Krauthammer shot back that this merely means our financial system is overcomplicated—not the presidency.

Though we enjoyed watching the exchange, we do wish that O’Reilly and his guest had concentrated more on discussing specific points from the article. See the clip yourself below.