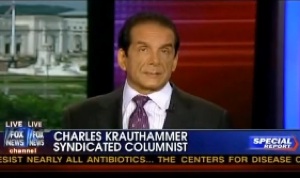 If you are looking for a good narrative to follow tonight’s primary elections, look no further than Delaware, where the Sarah Palin endorsed Tea Party candidate Christine O’Donnell is now up in the polls over the GOP-establishment candidate Mike Castle. As we pointed out earlier, the outcome of this vote may foretell the future of the conservative movement which appears to have raised the ire of neo-conservative thought leader Charles Krauthammer who bravely aimed some “friendly fire” at Sarah Palin.

Appearing last night on Special Report with Bret Baier called Palin’s endorsement of O’Donnell “destructive and capricious.” This is appears to be where the rubber meets the road in the fight for the future of conservatives. Krauthammer’s thinking is that Mike Castle would be a shoo-in for Joe Biden’s former Senate seat in the November general election. In his words, a vote for O’Donnell would be “irresponsible” or the Republican agenda.

Predictably, Krauthammer’s salvo toward’s Paline (and Jim DeMint who also backed O’Donnell) raised many eyebrows in the right-of-center part of the opinion media Internet. It probably best leave it to Jon Stewart’s favorite blogger AllahPundit to explain the context and meaning of this comment as he did on Hot Air:

There’s nothing here that you haven’t heard before, but since “true conservatives” are in RINO-stomp mode towards Paul Mirengoff and John McCormack and Jim Geraghty and a bunch of other people who were conservatives in good standing as of, say, four days ago, let’s make sure the stealth liberal known as Charles Krauthammer takes his licks too. The only part of CK’s monologue that I disagree with is the “capricious” part: I’m sure Palin and DeMint made their endorsements with due deliberation, knowing how much it would please their base. (They certainly took long enough to pull the trigger.) And from a philosophical point of view, endorsing O’Donnell is a win/win/win for them. If O’Donnell beats Castle and then shocks Coons in November, they’ll get all the credit; if Castle pulls it out and sends O’Donnell packing, they can at least tell their base that they were on the side of the angels; if, as is most likely, O’Donnell beats Castle and then gets steamrolled by Coons, well, the beauty of “true conservatism” is that the highest priority is defeating RINOs, not Democrats. They won the important fight, and without Castle in the Senate, the GOP brand will remain pure and principled and therefore well positioned for the eventual “true conservative” takeover of Congress. Like the man said, better 30 Marco Rubios than 60 Arlen Specters.

As AllaPundit later explains, “This has been a clarifying moment in terms of showing how conservatives prioritize differently: Some demand a stand on principle even if it means Democratic control, some demand an end to Democratic control even if it means compromising sometimes on principle.” This nearly perfectly sums up the current challenges of embracing a newly energized base of voters who aren’t exactly thrilled (!) with the status quo. Perhaps the death of the Democratic party have been greatly exaggerated? Nah – they’re most likely toast come November.