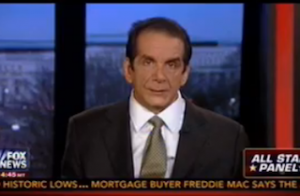 During a discussion on Fox News Thursday afternoon that linked President Obama‘s latest round of fundraising for the 2014 midterm elections with his efforts to pass stricter gun control laws, contributor Charles Krauthammer suggested an idea that appeared to shock his fellow panelists as well as host Chris Wallace. Now that it looks like he won’t get a vote in the Democratic-controlled Senate that includes the provisions he wanted, Krauthammer said, “All he wants now is the money.”

Krauthammer’s comment came after National Review columnist Jonah Goldberg predicted that the Senate vote President Obama insisted the Newtown families and other victims of gun violence “deserve” in his State of the Union address will now likely not happen. When Krauthammer quietly uttered, “All he wants now is the money,” the discussion stopped cold with a short bit of silence from everyone before Chris Wallace jumped in.

Krauthammer asserted that even if the bill includes broader background checks, it “won’t make a difference.” He continued, “Knowing all that, he is out there now exploring it as an issue. He is not going to get the solution he wanted, so he will make an issue. And that’s the way he operates. He does it on immigration. He does it on a lot of stuff. If you can’t win on a solution or get your way, you turn it into cash. He is excellent at turning stuff into cash.”