Krauthammer To Hannity: Obama Has Successfully Created ‘An Internal Civil War’ Within The GOP
video

Krauthammer To Hannity: Obama Has Successfully Created ‘An Internal Civil War’ Within The GOP 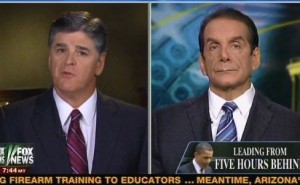 Sean Hannity brought Charles Krauthammer on his show tonight to discuss President Obama‘s role in the ongoing fiscal cliff negotiations. Both Hannity and Krauthammer agreed that Obama has been to hardline in trying to negotiate with Republicans, but Krauthammer gave the president some credit for managing to effectively tear the GOP in half over whether or not they can compromise with Obama on raising tax rates.

Hannity sardonically celebrated Obama’s return from his Hawaiian vacation to deal with the impending cliff. Krauthammer admitted he doesn’t “begrudge [Obama] his holiday,” but he does have an issue with how the president has been dealing with the fiscal cliff negotiations. He did, however, give Obama his due credit for a stunning accomplishment amidst the ongoing talks.

“He’s been using this, and I must say with great skill–-and ruthless skill and success–to fracture and basically shatter the Republican opposition… His objective from the very beginning was to break the will of the Republicans in the House, and to create an internal civil war. And he’s done that.”

Krauthammer said Obama has been pushing the GOP since winning reelection to focus on raising tax rates because he knew it would be a sore subject between differing factions of his Republican opposition, and his interest in scoring a partisan political victory outweighs his desire to seriously deal with the national debt.

Hannity wondered if Obama was in more serious danger of tarnishing his legacy than the Republicans. Krauthammer maintained that the GOP had more room to negotiate than they thought, and while initially they may get the blame for the consequences of going over the cliff, in the long run it will be part of Obama’s legacy and “he will be remembered as a failed president.”

Hannity cited this as just the latest example of Obama “clinging to this radical ideology of his,” but wondered if the GOP will just take any deal Obama offers up because “they’re scared to death.” Krauthammer said both sides have mandates of their own, and whether or not Obama likes it, he’s going to need to cave if he wants to avoid going off the cliff, or at least stem its most economically damaging consequences.