Krauthammer To Hannity: Roberts Was Protecting The Court’s ‘Reputation’ With Health Care Decision 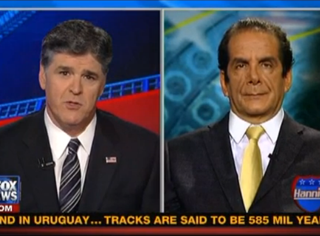 The shocking opinion Chief Justice John Roberts handed down on Thursday left many conservatives scratching their heads through last night, when Sean Hannity asked Charles Krauthammer to explain what logic could compel him to uphold the legislation. “He sees himself as the custodian of the reputation and stature and standing of the court,” Krauthammer explained, such that he was “loathe” to fully overturning laws Congress passed legally.

RELATED: Roberts’ Decision On Health Care Was The Only Historically Responsible Thing To Do

“It’s clear that he sees himself at two things,” Krauthammer explained, the first being a “conservative,” one that could not let the argument that the penalty was constitutional under the Commerce Clause stand. But he also saw himself, Krauthammer explained, as responsible for the public opinion of the Court given his standing as Chief Justice. “The reason he went searching for some other way,” Krauthammer posited, “is if Obamacare was struck down… that it would weaken the standing of the Court.”

Hannity expressed concern about this as an argument admitting that the Chief Justice “was swayed more by politics than he was by the Constitution, and that troubles me,” and Krauthammer agreed, though adding that “there is something conservative” about hesitating to overturn laws.

Ultimately, both Hannity and Krauthammer agreed with Justice Antonin Scalia‘s dissent on the matter, with Krauthammer explaining that a speeding ticket isn’t a “tax” any more than, in his eyes, this health care penalty is.