Krauthammer to MSNBC: If Obamacare Fails, Liberalism ‘Will Be Set Back a Full Generation’ 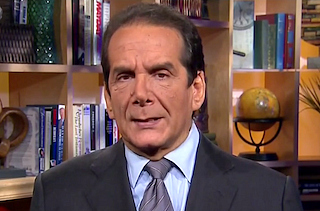 Washington Post columnist Charles Krauthammer surveyed the last three decades of his career on Morning Joe Tuesday morning, and described a dialectic between Ronald Reagan’s conservatism and President Barack Obama’s liberalism, the latter currently “hanging in the balance” as Obamacare, its primary embodiment, rushes head-first into the world.

Calling Obama “remarkable,” Krauthammer explained, “What I find the most remarkable about him isn’t only his intelligence but his ideological ambition.”

“He said something very interesting in 2008,” Krauthammer continued. “He said Ronald Reagan was historically consequential in a way that a Clinton was not. What Obama meant was Reagan changed the ideological trajectory of a country, which for sixty years since FDR had been dominated by a liberal zeitgeist. Here comes Reagan and he changes it. He doesn’t succeed in all the things he wants to do, he isn’t able to cut the government, but changes the way we look at government.”

RELATED: Stewart Clashes With Krauthammer: Why Is GOP Bringing So Much ‘Chaos’ to Washington?

“Obama has always seen himself—and it is remarkable because he did this as an outsider, somebody who really had a long shot at the White House—but he saw himself long ago as world-historical, as a figure who would change that trajectory, end the thirty-year conservative ascendancy ushered in by Reagan, and begin a new liberal ascendancy. The irony is that his signature achievement, Obamacare, is the test of this new liberalism, and today it hangs in the balance of a website or a promise here and there. So there’s kind of a practical reality check on his ambitions. If he does not succeed with Obamacare, the cause of the kind of expansive liberalism, the kind of entitlement state he’s been looking for, I think will be set back a full generation.”