Krauthammer To O’Reilly: If The Race Goes To The Convention, Romney Could Lose
video

Krauthammer To O’Reilly: If The Race Goes To The Convention, Romney Could Lose 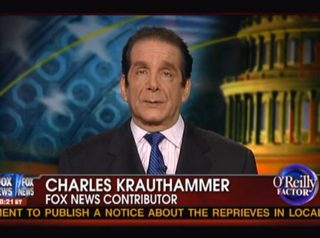 Last Tuesday was not a good election for Newt Gingrich. After sweeping South Carolina, he presumptive frontrunner lost Florida to Mitt Romney, badly. And he didn’t even call Romney to congratulate him. Despite his private failing, though, Charles Krauthammer told Bill O’Reilly tonight that Gingrich’s speech this time around had significantly less “whining,” and that could bode well for the former Speaker all the way to the convention.

Krauthammer noted that Gingrich’s speech worked for him because, despite being angry in some ways, “there was no whining, no playing victim.” He continued to explain that “you don’t go around whining” as a presidential candidate because no one wants their presidents to be whiny. Instead, “you hit back with confidence and audacity,” and in that Gingrich succeeded.

O’Reilly then asked about the Romney campaign, wondering whether it was possible “the Romney campaign can get arrogant.” Krauthammer believed this to be a possibility, and since the Republican Party had a new system of proportional representation, Romney could not discount the possibility of the convention going in someone else’s favor. “Ron Paul will stay in even if the Apocalypse comes,” he joked, “and even if it happens, I think he would only suspend the campaign.” He added that Rick Santorum “can live off the land” and, if he wins Missouri and some other Super Tuesday states, he has a case against Gingrich. Ultimately, it was all up for grabs, Krauthammer concluded, with the convention landing in Tampa this summer.