Krauthammer: Trump Debate Where ‘Moderator Chooses A Nominee Afterward’ Is A ‘Joke’
video

Krauthammer: Trump Debate Where ‘Moderator Chooses A Nominee Afterward’ Is A ‘Joke’ 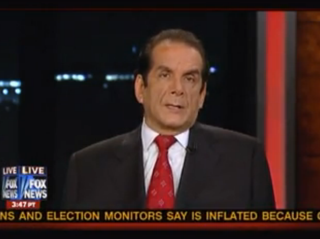 In a strange twist that, given the way the 2012 Republican campaign cycle has gone, isn’t quite all that surprising, Donald Trump seems to have taken over the news cycle yet again, going from Republican primary frontrunner to Republican debate moderator and prompting a backlash from Republican figures who consider nominating their presidential pick a serious responsibility. Not to be left behind today, Charles Krauthammer weighed in on this issue, with a short and sweet declaration that the debate was, in fact, a “joke.”

RELATED: Jon Huntsman Won’t Kiss Donald Trump’s Ring, Or ‘Any Other Part Of His Anatomy’

The conversation was short and began with host Bret Baier turning to David Drucker of Roll Call, who argued that Trump was not the only problem with the debate, but simply that there had been so many debates that yet another one would not be “the most attractive ticket.” There was also the fact, he noted, that Trump was still threatening to run for president as an independent, and “somebody like him could split up the Republican vote.”

RELATED: Donald Trump Fights Back: ‘Ron Paul Is A Joke’ And George Will Is ‘Third-Rate’

Liz Marlantes of the Christian Science Monitor took former Speaker Newt Gingrich‘s side on the debate, however, arguing that Gingrich’s point about having a sense of humor about these things was healthy. To that point, Krauthammer agreed, but added, “a debate in which the moderator chooses a nominee afterwards, I think, is a reality TV show. It’s not a debate, and it is a joke.”